With files of nomination of Brahma and Sarania, there are four candidates are in fray to contest Kokrajhar HPC till today.The election would be held on April 24. 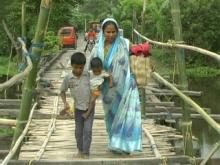 29 Jun 2014 - 10:25pm | AT News
Stunned by widespread criticism in the time of flood and landslide in Guwahati, chief minister has cleared a slew of measures to deal with the issue firmly. After holding a crucial meeting with the...