With just few days left to the Assam assembly election,the ruling Bodoland Peoples Front(BPF) has been gaining mass supports from various parts in the region.

Over 100 BJP leader and activists under the leadership of Bipin Chandra Brahma from Dotma Mandal under Kokrajhar west constituency in Kokrajhar district joined in BPF on Tuesday and extended help party to gain mass support ahead assembly election.

Bipin Chandra Brahma,who along with his supporters joined BPF party told that he and his associates joined the party ahead election seeing good governance and social integration in the region.He said that ruling BPF party is winning in large number of seats in which they are contesting.

‘The developmental as well social uplift activities initiated by BPF party during administration have been attracted their minds among society and hence they joined the party.The BPF was working all around development for the citizens’, Brahma said. 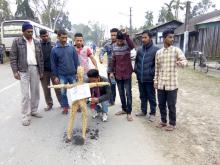