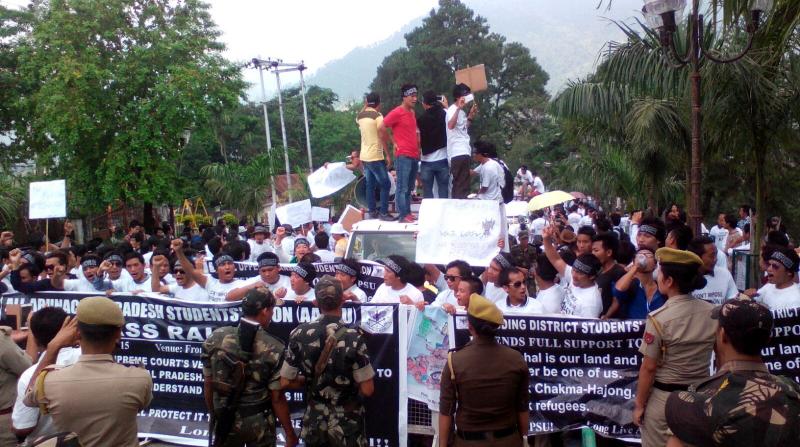 Arunachal Pradesh students hit the streets in Itanagar on Monday in protest against the Supreme Court’s judgment granting citizenship rights to the Chakma-Hajong refugees.

Thousands of students from thevarious colleges, schools ,Universities  apart from other citizens came out of their homes and joined the AAPSU-sponsored rally in Itanagar.

The huge gathering agreed to go all out against the judgement and shouting slogans against the refugee status the protestors in large number marched towards the Rajbhawan were they submitted memorandum to the constitutional head.

AAPSU president Kamta Lapung told Assam Times that the court judgmentis unacceptable which has hurt the sentiments of the indigenous people. “AAPSU will continue its fight against the Chakma refugees in the line of democratic way. The agitation is the strong message to the Centre,” he said.

Permalink Submitted by Lalit Chakma on Tue, 29/09/2015 - 04:12
Dear, AAPSU leaders, please understand that Arunachal Pradesh will take another 1000 years to be at par with TRIPURA. Come to Tripura and see how harmoniously we are living. You have less knowledge about the basic things in granting citizenship to the Chakmas and Hajong. You see your %%% history and confirm me if it says that you are the original son of the soil. Shame on you, that you have no faith on SC verdict. I have seen your people and your supporter. Most of them are headless and brainless. They know only how to get into unnecessary controversy and arguments. I have seen many Arunachalee students who are very reserved, timid and lawless when they come to study outside Arunachal Pradesh. Please behave in such a way where your head will be be held high throughout the world. Dont be like a frog who is in the well. The world is much bigger than the well. Come on many development things are needs to be brought for Arunchal Pradesh. Just accept the Chakma and Hajongs and become the part of building the nation stronger.

16 Oct 2011 - 5:30pm | Anup Biswas
The ASDC Dima Hasao District Committee condemned the recent violence in Dima Hasao district, criticizing the Govt that it was due to Govt’s lack of adequate sincerity in dealing with...

18 Apr 2013 - 12:16pm | AT News
The United Liberation Front of Asom has strongly criticized Zubeen Garg for performing in Hindi at the Latasheel function.In a statement released to media on Thursday, the outfit alleged that the...

23 Nov 2008 - 5:17pm | editor
The serial blast accused and former NDFB home secretary Sabin Boro and Bhutanse citizen Tenzing J Zangpu on Saturday have been remanded to judicial custody even as police is believed to have failed...