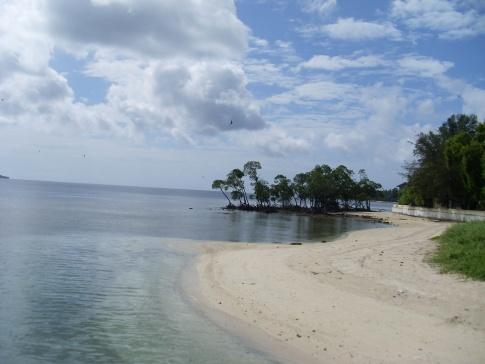 The Andaman & Nicobar Islands had been on our travel plan for quite some time. We are a family of sea lovers. Something in our veins draws us inexplicably to the vast blue waters… and this ‘something’ had been nagging me persistently for a while to pay a visit to the idyllic islands. The remoteness and the ‘kalapani’ tag was a fascination since childhood.

One fine summer-break evening my daughter insisted that we go there. Seconded very strongly by my son, my wife, I had no choice but to browse the computer screen and check out airfare options. The enthusiasm spread quickly! My wife got an LTC and was allowed Airfare under a scheme of the Govt. of India and all was set!

We first flew to Kolkata and stayed overnight at the Kolkata Assam House. The day we landed, we were greeted by a bandh called by Mamata didi. It was almost a desolate city, when we flew to Port Blair the next day. The air travel was pretty uneventful, excepting a few turbulences and paranoid faint-hearts. However, as we landed at the Veer Savarkar Airport, the mesmerisation began.

We started exploring the main island of Andaman and on third day, someone suggested we visit the Island of Havelock and experience its emerald beaches and pristine natural beauty. It was a great piece of advice we heeded!

The Havelock Island is 115 square km in area and situated east of Great Andaman, and about 57 km northeast of Port Blair. One has to take a ferry to reach there. Our ferry trip was extremely interesting. We found that the ship left for the Neil and Havelock islands quite early. We had no idea about the timings and ticketing system. So we woke up early at the crack of dawn and headed for the jetty in a taxi where we had to wait for an agonizingly long time in the queue. Having two energetic youngsters with nothing to do wasn’t helping in maintaining our patience either! We finally bought the tickets for Rs 185/- per head. The islanders need pay only Rs. 25/- per head though – a great facility extended by the A&N Islands to facilitate frequent travelling between islands.

We boarded the ‘SS Baratang’ – a gleaming white ship. Such a ship we had never boarded before in our lives. It was well stocked with life jackets, life boats and manned by a well disciplined crew. It was a proper ocean-going ship. The voyage was really terrific. After about one hour into it we ran into a heavy sea current. The ship started bumping and we all had to hold tightly to the bars on the deck. My wife developed sea sickness as opposed to my daughter who was enjoying the winds to the fullest. To me, the ride was scary at times! And owing to the wet sea-air, no one knew if their clothes were drenched due to the wind or the sweat! Anyway, we reached after a couple of hours. At the Havelock jetty, we were referred to a local guide, Rishi, who took us to a resort we booked while on a jeep. The great Indian cellphone network kept us hooked to the outside world.

Enjoying 'bonda' in a wayside stall

The population of the island mainly comprises of about 6000 Bengali settlers who inhabit five villages, namely, Govinda Nagar, Bijoy Nagar, Shyam Nagar, Krishna Nagar and Radha Nagar. Rural life is abloom – though good infrastructure, all-weather roads, a well equipped jetty and inland transport like Jeeps and autos defy the remoteness of the place. We saw many temples around – these people had not let their culture fade away into the oblivion though they had been separated from the mainland by about 5 generations. The island is named after Henry Havelock, a British general of the Raj era. It is one of the few places where A&N Islands Administration has permitted and encouraged development of tourism, with a focus on promoting eco-tourism.

Since it was the month of June, a season of heavy rain, not many tourists were around, which suited us very well. Our resort turned out to be a luxury hut centrally located amidst a cluster of such structures, most of which were vacant – so the kids could fool around as much as they liked, and as loudly too. They even discovered a native kitten, a small beach, and the way to the restaurant. We had our favourite food in the ‘Food Hut’ – rice and fish curry. The sea beach was about 50m away. At night, the moonlight reflected on coral sand looked silvery.

We went to the beach next day. It was so pristine that the heavy showers could not deter our spirits. It curved concavely and terminated in shear green cliffs – emeralds on the sapphire of the Bay of Bengal… We spent the whole day in the water, upgrading my daughter’s sea-shell collection, playing with the waves and living some picturesque moments… some of which we managed to capture in celluloid, digitally in fact. We only broke for lunch. The food was quite cheap, unlike other tourist places of India, adamant on stripping tourists of every last paisa! It was probably because the earning from tourism is a supplementary income here, the main source of income being agriculture – rice, arecanut and spices are the main crops.

Havelock Island had avoided much of the devastation during the tsunami disaster of 2004. Crocodile attacks are reported sometimes adding to its adventure quotient. Beach No. 7 on the western coast, better known as "Radha Nagar" Beach, is one of the most popular beaches on Havelock and was deemed the "Best Beach in Asia" by Time Magazine in 2004. Other notable beaches include the Elephant Beach on the northwest coast and the Vijaynagar Beach (No. 5), Beach No. 3 and Beach No. 1 on the east coast.

The coral-strewn, white-sanded beaches, backed by dense forests that provide welcoming shade, look out over turquoise water. Some stretch with a sandy bottom, perfect for a swimming session, and some with excellent coral reefs, great for snorkeling in. A great combination, indeed. A particularly beautiful reason to be here is to view the sunset.

On one occasion, I looked around, inhaled deeply and drank in everything around me. Rishi once told me that a better time to visit would have been between November and April. But for me, June was still heaven, especially considering the sweltering heat we’d left behind in Delhi!

We found plenty of things waiting for us to do but we didn’t have much time for some – Scuba diving, Snorkeling, walking on the coral beaches and coral bridges, rides on jeeps or elephants though dense green forests, fishing, boating, bird-watching, dining on the beach by moonlight, getting lost in photography… or even just sitting there, anywhere, staring off into space, hearing the sea-waves, or with eyes closed and forgetting all else… I wonder if one could do that here forever and experience eternal bliss…

I hummed to myself the words of Firdausi about Kashmir, and had he visited Havelock repeated again..

8 Jul 2017 - 11:38am | AT News
The Nagaland Press Association (NPA) expressed worries over the formation of a State chapter of Newspapers Association of India (NAI) and submission of a memorandum to the State Governor PB Acharya...

28 Apr 2016 - 9:41am | Shajid Khan
In a kidnapping case where two youth Amin Ali(25) and Shankar Das (28) went missing after both of them left for Goreswar from Tangla railway station on Sunday last. The same day the family members of...