Tezpur : One person was killed on the spot when he met with an accident with a bus near Haleshwar Mandir, around 10 kilometers from Tezpur. The deceased has been identified as Tridip Hazarika and was around 30 years old.

17 Jan 2009 - 6:52pm | Chinmay Chakravarty
Slumdog Millionaire is yet to be released in India (set for 23rd January) and the controversy is already razing. Its sweep in the Golden Globe Awards including the one for A R Rahman, the first... 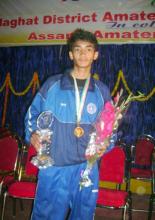