Tura Municipal Board (TMB) is overlooking fact and is set to inaugurate its newly constructed Marketing Hub in Ringre, which is a premier market site in Tura town. After much hiccups, the Marketing Hub have taken its shape. But on an untimely note, the very building has come under scanner!

The building, constructed at an estimated cost of 2.6 cr is located adjacent to Tura District Auditorium.

As per guidelines, a market hub of such a scale should have had a parking space, a proper pit, drainage, protection and retaining wall but Tura Municipal Board has flouted all norms. The marketing hub was expected to ease out problems arising out of vegetable vendors, who have taken on the footpath. However, the very building has now garnered all the attention for wrong reasons.

Above all other facilities – the marketing hub will have provision for sell of meat, fish and vegetables. Surprisingly, there is no facility for throwing wastes, which will be generated on a daily basis, causing much inconvenience to commuters. It will also generate a lot of foul smell in the vicinity.

The market does not even specify on the slaughter of animals and poultry.

TMB officials are tight lipped even as conscious citizen and civil bodies like Garo Students Union have taken up the matter. Editor of Achik Songbad Dr. Alva B. Sangma has filed a complaint on the issue with the Deputy Commissioner of West Garo Hills.

The danger over this construction is eminent. In absence of a protection wall, it poses a serious threat to other establishments in Ringre.

It is learnt that the present CEO of Tura Municipal Board has vowed to go ahead with the inauguration in the second week of December.

Now the question is:

1.      Can the public afford to see the inauguration, which will come as an eyesore?

2.      Is it not the responsibility of district administration to ensure that TMB adheres to all norms?

3.      Will the government remain a silent spectator and allow its inauguration?

4.      Is it not the responsibility of the opposition and local MLA from Tura to take up the cause in public interest?

5.      Can we afford such negligence from an authority like TMB?

It is to be recalled that South Tura MLA John Leslee Sangma had threatened to move a privilege motion against Community and Rural Development Minister Prestone Tynsong in the State Assembly for misleading the House regarding construction of a marketing hub during its October session. During the Question Hour, Tynsong, while replying to a question on the status of Urban Marketing Hub at Tura had told the House that the construction work of the said hub had been completed in compliance with the existing Meghalaya Building bye laws.

18 Oct 2012 - 2:25am | editor
A fake financial institute has once again duped lakhs of customers during the last two year. The institution in question is Jivan Surakhya Group. Proprietor Chandan Das, who has recently sold out a...

3 Dec 2009 - 10:24pm | Juthika Das
A dead body of a driver of Nalbari reserve police was found at Bardhantuli no. 5 Batasila gaon Panchayat under Nalbari police station in Barpeta district this morining. The dead body was identified... 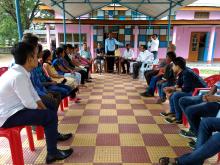