Demand for restoration of Nokma rights for women 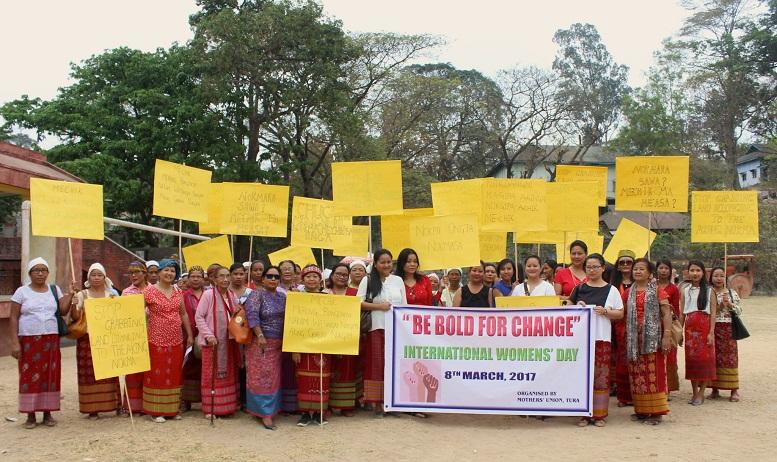 A modest crowd of young and elderly women today gathered at Chandmari playground here to embark on a mission to revive and restore the custodial rights of women in Meghalaya’s Garo hills.

Traditionally women are head of a village, while their husband were suppose to assist them but over the years things have changed and men are at the centre stage for taking decision related to village affairs.

Mother’s Union, one of the oldest women’s organisation of Garo hills, established in 1941 today made their voice loud and clear apt to this year theme – “Be Bold for Change” to make the authorities realise that the traditional practices and the position of a women in Garo society has to be restored back.

“In Garo society female descendants are recognised as rightful owners of the A’king land belonging to a particular mahari (clan). The female is therefore conferred with the title of Nokma and all the powers relating to the land are her birthright to be exercised on the advice of the chras (maternal uncles) of the clan”, Sume B. Sangma, secretary of Mother’s Union said, while addressing the gathering at Chandmari.

Members of Mother’s Union urged gathering that it was the responsibility of all educated women to create consciousness on the rights of the Nokma and empower the women of Garo hills.

Nokma enjoys a very powerful position in a Garo society. In a village, all decision related to land and natural resources are vested on her.

“Husband of the Nokma is designated as male Nokma but only for the purpose that he may assist her in the execution of her land powers. However today it is seen that the men are actually taking decision without even consulting the real Nokma”, Balsa Sangma, president of Mother’s Union said.

The activists felt that there was a perceived notion in the society today that Nokma is a man, which is however, not true.

“People understand that Nokma is a female but knowingly or unknowingly they assume that the husband of the Nokma for seeking decision on land and other resources in a particular clan land. This could be that most Nokma in rural areas are not educated and their husband takes the advantage”, Balsa added.

After a holding the public meeting the people took to streets and marched to Garo Hills Autonomous District Council (GHADC) office, and submitted a petition to chief executive officer (CEM) Denang T. Sangma seeking restoration of custodial rights of a women.

In the petition, Mother’s Union said, “Many unscrupulous practices are taking place due to the irregularity in legitimating the husbands as Nokmas parallel to the inherited title conferred upon the women”.

They also pointed out to the CEM that many illegitimate male custodians of the A’king land are mushrooming in rural areas for the like of chras, son-in-law and nephews who are executing the land powers on behalf of the Nokmas. They are engaging in a battle to become Nokmas by indulging in many immoral activities and by influencing illiterate and simple Nokmas.

22 Oct 2015 - 7:39am | AT News
Once again Assam and its people have reasons to hang the heads in shame. Four drunken youths have attacked a foreign couple in Jorhat on Tuesday night forcing police to launch an operation in search...

13 Jun 2007 - 5:30am | editor
Some 28 candidates will apply for the top job at ONGC. A search panel headed by the Public Enterprise Selection Board (PESB) Chairman, Mr N.K. Sinha, held interviews on June 5-6 to select the...