A minor girl aged about 12 years was alleged molested by cops at Araimile locality in Tura, which has raised a huge hue and cry. The victims' family have filed an FIR, prompting the Superintendent of Police (SP) to arrest all the three accused.
The henious incident took place on December 29, when the victim along with her uncle were returning from a nearby market in an auto rickshaw. The police patrolling team stopped the auto rickshaw and abused her uncle on the pretext that he was a suspected cadre of Garo National Liberation Army (GNLA).
The incident occurred around 11:30 pm.
Eyewitness to the incident told that three police personnel were in a gypsy along with 2nd incharge of Chandmari Beat House B Kharsong. The victim recounts in her FIR saying that the policemen were in a drunken state. She also says, as the cops continued abusing her uncle, one of them molested her and made advances. Locals have identified the the cop as B Kharsong.
Victims uncle said, "If the police had any doubts of my involvement with GNLA, they could have interrogated me, why did they manhandle and molest my niece".
He recounts, "After holding consultations with elders in the locality, civil society members and those who had witness the incident, we decided to file the FIR". The copy of the FIR has been submitted to Tura North MLA Noverfield Marak for his intervention as well.
The FIR was filed by the victims family on Jan 2. Police have now begun their investigation.
West Garo Hills SP Mukesh Singh told that the erring police officers have been arrested. Singh also stated that the cops will be suspended after due investigations were completed. He also asserted that police will maintain zero tolerance for crime against women and all guilty will be punished accordingly.
Civil society member Jaynie Sangma demanded a stringent punished for the accused. She said, "This is not the first instance of police excesses in the Garo Hills region. The Nurul Islam case is another one to point and when the law enforcers become law breakers, things can be really nasty. We want exemplary punishment for the guilty ".

Kokrajhar violence toll goes up to 11

21 Jul 2012 - 11:58pm | editor
The toll in Kokrajhar violence mounts to 11 on Saturday. The district administration has clamped curfew to ensure peace in the entire Kokrajhar area where three more persons killed in group clash a... 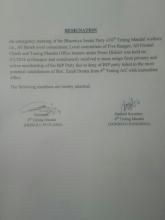