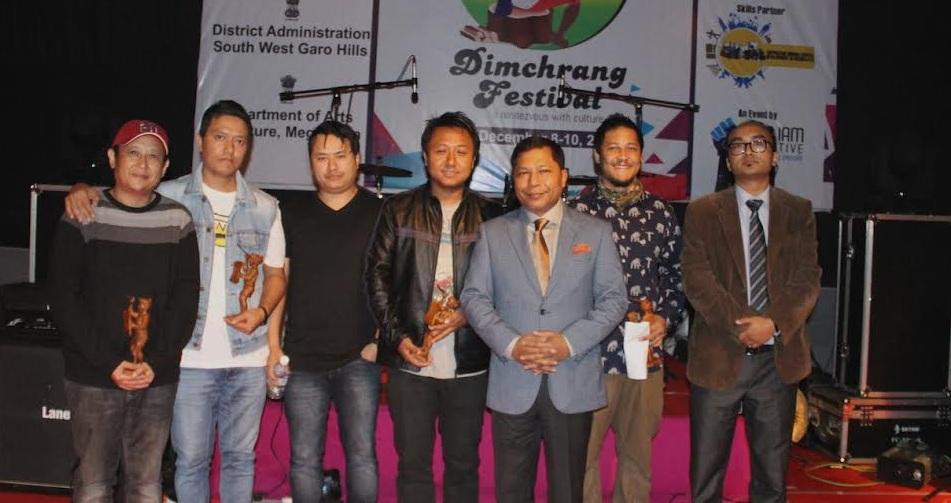 It was a spectacular end for Dimchrang Festival 2016 as four sensational bands of Garo hills and Still Waters from Sikkim enthralled over 8000 plus crowd here yesterday evening.

The stage was on fire with the entry of Still Waters from Sikkim, which featured Abishek Gurung, finalist of a popular TV reality show. The well-known vocalist greeted the crowd, which saw a thunderous applause.

In sync with this year’s theme -- “youth as change maker”, the vocalist was asked to interact with the youth during the concert.

Overwhelmed with the colourful bouquet of cultural extravaganza and musical overdose, Gurung urged the youth to pursue their passion for music.

Talking about their earlier performance at Baghmara in South Garo Hills, Gurung said that Garo hills has been very close to their hearts and they would like to perform here again.

“We love the hospitality of Garo hills. People here has passion and energy for good music”, Gurung added.

Meghalaya chief minister Mukul Sangma witnessed the performance and also felicitated the band members. Addressing the gathering in the midst of festivities, Sangma said, “Meghalaya was all prepared to take such events to new height”.

He said that the government has recently established the centre for excellence in music at Shillong and Tura to give an opportunity for the youth to horn their skills in the field of music.

The chief minister urged the public to encourage and motivate their children in the field of music and art, so that they can excel in whatever field they are interested.

Bowled with the energetic show and the event, the chief minister announced that a much bigger festival would be held at Ampati to give platform for the local talents and an opportunity for the people of Garo hills to witness performance by artists from other parts of the country.

He said that shows like Dimchrang can fosters relationship with different cultural and communities, as the guest and participants, who are part of such festival will spread the stories of Garo hills and its lifestyle to the world.

The chief minister said that through the district level art and cultural societies, the government has been making its pitch to create an exclusive product to brand “destination Meghalaya”.

Grenade blast in Sonari; no casualty

22 Sep 2012 - 1:14pm | editor
ULFA militants exploded yet another grenade in Sivasagar district of Assam on Friday to make their presence felt.The blast took place at Sonari near petrol pump at around 10-40 at night. There is,...