Two promising photojournalists from Assam have been awarded top awards for their excellent piece of work in news photography in a competition organized by Media Foundation of India (MFI) nationwide -- MFI Yes Bank National Press Photo Contest 2013. Biju Boro of Asomiya Pratidin bagged the first prize in the General News Category for his image of a poached rhino while Manas Paran associated with Protibimbo, an Assamese daily got the third prize in Spot News Category for his famous photograph of a Leopard launching an attack on a person.

This was declared on the MFI website on Friday. “Getting such type of recognition at the national level is indeed satisfying. For us sometimes clicking a photograph gives us immense satisfaction and happiness but awards always mean something. However, it felt bad to click that very photograph of the rhino on that day,” said Biju Boro after getting the award. Biju’s photo was taken in Kaziranga National Park on September 26 in 2012 when poachers had dethroned the ill-fated rhino. 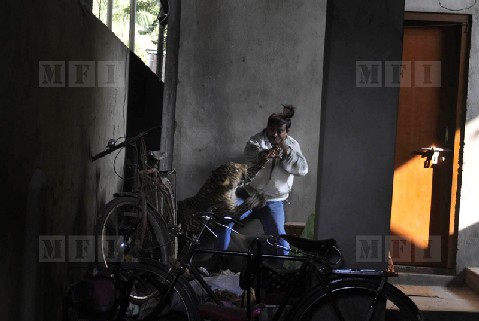 Altogether over 8000 photographs shot in 2012 were submitted by more than 340 photojournalists for the competition from different parts of the country.

Manas Paran’s photograph which has already brought several laurels from different contests form across the globe besides being carried by most of the major newspapers and new websites got the third prize in the Spot News category. It was taken on January 7 in 2012 at Silpukhuri in Guwahati.

“Winning an award or not that photograph means a lot to me. Although luck was with me during that time but I believe luck only favours you when you are brave enough. When I look back, I realize I was brave enough on that day. The angry leopard was just few metres away from me but I took the risk and got the result,” an elated Manas Paran said.

24 Dec 2016 - 9:20pm | Shajid Khan
At a time when man- elephant conflict in Udalguri district has taken one of the worst turn a loner wild jumbo created havoc at Khoiragrant area of Attarekhat under Udalguri district on Friday night....

11 Jul 2017 - 7:28pm | AT Kokrajhar Bureau
A total six relief camps have been opended for the flood affected peoples in Kokrajhar and Chirang districts in last 48-hours as Gaurang, Champamati, Sankosh, Modati, Gurufela,Saralbhanga and Aie...