The agitation on separate state demand might soon hit the entire North East, with organisations like the All Bodo Students Union, the Koch Rajbonshi organisations and organisation from Karbi-anglong districts calling Bandhs, road blockades, Rail blockades since 31st July in protest of separate state demands.The Record breaking Bandh call times has gone up as high as to 1500 hours by UDPF, 300 hrs by KPLT, 48 HRS by ABSU, and 36 hrs by AKRASU. There seems no reason why the economy will not only hit Assam but the entire North East if things continue in the same pace.

The only entrance to North East is through Kokrajhar district, which falls under Bodoland Territorial Area District,and both Railways and Roadways cross through Kokrahjar, which have been affected by Bandh called by the All Bodo Students Union.

"We have asked the organisations not to call for Bandh because it hits the economy, it will hit the entire North East, prices will go high, The government have said that it has stock for one month but it is not clear if that stock is for Assam or for Entire North East" Says Rupam Goswami, Chairman of Assam Chamber of Commerce, who had personally requested leaders of Bodo and Koch Rajbonshi organisation not to call Bandhs, but failed to get any good response."If things continues in this manner it will be difficult to get even Dal and rice in the market".He added.

"There will be inconvenience for the public and we are helpless" says, Longti Timung,president, Guwahati Karbi Students Association,when asked is not the poor people in general affected by the Bandhs."Our agitation will continue unless our demands are fulfilled" he added,while staging a protest rally in Guwahati today.

"Because of agitation the rail service also have also been affected badly, in the last three days 40 trains had to be cancelled and we are also running security trains in Kokrajhar" Said Jayanta Bhattacharya, PRO, NF Railways. 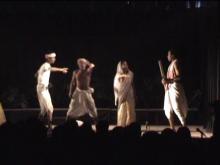 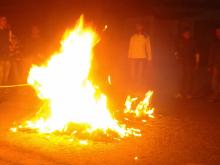 28 Jan 2014 - 11:54pm | SK Hasan
Protesting the candidature of Sanjay Singh in the Rajya Sobha seat from Assam, Nazira sub-divisional and regional units of All Assam Student Union burnt the effigy of the state president of Congress(...