Tirap district has been granted membership of Arunachal Shito-Ryu Karate-Do Association for the year 2013 by the head office situated at Chimpu, Itanagar. The ASKA is affiliated with All India Shito-Ryu Karate –Do Federation. Somgang Lowang has been appointed as the Branch Instructor for Tirap district ASKA.

This will facilitate the young Karatekas of the district to hone their skills and help them participate in tournaments held every year all over the world. There are many trained young boys and girls in Tirap but for want of proper forum and platform they could not utilize their acquired skill gainfully.

When asked about the introduction of ASKA in Tirap the Instructor Somgang Lowang said that to begin with it would be meant for women and girls only adding that these vulnerable sections needed to be taught the nuances of self defense. He also said that shortly ASKA for the boys would be introduced in the district.

21 Apr 2014 - 4:14pm | Jintu Sarma
Two-days-long Indian Classical Dancing Festival is going to be held at Baan Theater, Tezpur on April 26-27 on the occcasion of the World Dance Day. Number of national artist will take part and... 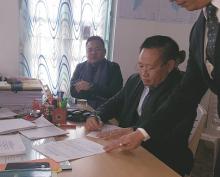 10 Feb 2018 - 12:58pm | AT News Dimapur
DIMAPUR, Feb 11 (NENA): One KK Kulimbe reportedly invested Rs 5000 with the alleged intention of exhibiting his rare discovery that TR Zeliang, the Chief Ministerial candidate of the Naga...