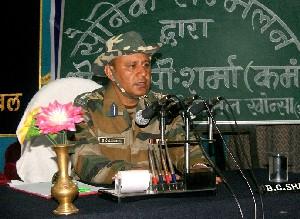 The Commandant of the 36th CRPF BC Sharma addressed a Sainik Sanmelan at Khonsa, the district headquarters town of Tirap district in Arunachal Pradesh on 24th June. He asked the officers and all ranks to work with utmost dedication and sincerity adding that they must place service and loyalty before self. He also highlighted some of the major achievements of the Battalion in maintain g law and order and rule of law. The Commandant   threw light on various civic actions schemes undertaken by the Battalion under his command. He was addressing the officers and the jawans before his departure on his transfer from Khonsa.

It may be mentioned here that during his 2-year tenure as CO, 36 BN CRPF, BC Sharma created six new company posts at Kaimai, Dadam, Tissa, Wakka, Longding and Deomali. He also conducted a number of civic action programmes in various places of the district which benefited the local people greatly. He was a great leader and guided his Battalion efficiently in containing insurgency in the district. 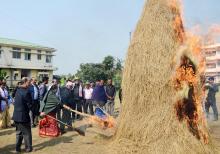 13 Jan 2017 - 8:19pm | AT News
Assam Governor Banwarilal Purohit greeted the people on the occasion of the Magh Bihu. In his message on Friday, he said Bihu symbolises the spirit of integrity, brotherhood and camaraderie among...