Ten days training on Bamboo and Cane craft organized by AIDA concluded today at the craft centre Longding in Arunachal Pradesh. The training was sponsored and inaugurated by the Deputy Commissioner of Longding district Shilpa Shinde, IAS on 10th of June 2013. During her inaugural speech she stress on the need to build the capacity of the people and to make optimum use of the abundant natural resource in the area and become self sustainable. She also expressed her desire to conduct different kind of skill training every month in the district.

Neikhozoto Savino President Craft Council of Nagaland and his assistant Mr. Langkai Konyak were the trainer. All together twenty-two names were enrolled for the training and seventeen participants attended fully. The trainees were taught to make utilities items with bamboo and cane like dustbin, tray, pen stand, flower basket etc.

Shri. Kesang Goiba, Circle Officer Longding Headquarter grace the valedictory function of the training. He expressed his happiness on the effort the trainees put in to learn the trades in few days time. He also encouraged the trainees to put more effort and also attend more training in future to build their own skill and not to look for the incentives or stipend.

One of the trainee said that before bamboo was just a grass but after this training he saw the worth and value of bamboo. Another trainee also expressed that the first few days it was really hard but she began to enjoy the new art and the team spirit. For many this training was the first ever venture to use different tools and make different craft. 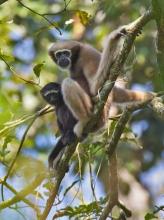 24 Dec 2017 - 12:22pm | Akshaya Pranab Kalita
NAMRUP: Literally boxed by Arunachal Pradesh in the east and south and the historic Charaideo in the western side, Assam has yet another paragon of nature's beauty and bounty. Known as Jeypore...