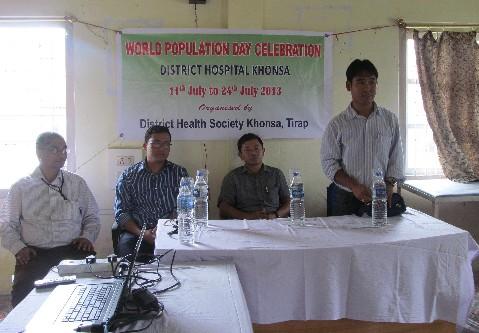 World population day was observed at Khonsa to aware the people about the growing population explosion and to remind them about the potential dangers of over population.  The programme which was organised by the District Health Society had the ZPC, Mr. Chawang Lowang as a Special Guest, who shared his views on the importance of family planning and population control.  Speaking on the occasion, Dr. T. Matey, DMO incharge ask the people to avail the various  birth control measures provided by the government  medical setup in the district. Dr. P. Rakshit, SMO in his power point presentation gave detail information’s on the world Population day. Various methods of birth control measures were also displayed to the people.  People present on the occasion were ASHAs, Anganwadi workers , public and medical staffs.  Dr. K. Socia, Medical  Superintendent of District Hospital Khonsa, appreciated the peoples response and expressed his gratitude to the crowd.(

7 Nov 2016 - 9:14pm | Ranjanjyoti Mahanta
A12 year old school boy Monday died after he was run down by a Hyundai Verna on the Nagaon-Dhing road near Kadamoni, Batadrava, Nagaon on Monday noon. According to police the accident took place when...