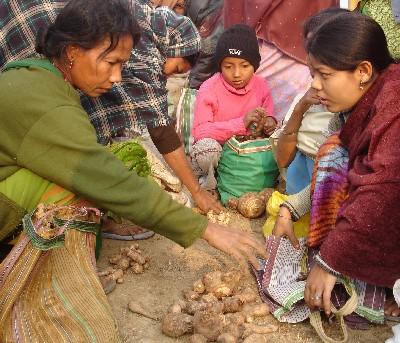 You cann't believe until you visit the Mela ground that in this Hi-tech age the barter syestem of trade is still prevalent in Jonbeel Mela - a community festival of the Tiwa tribe of Assam.

The Mela helds at a historic spot known as Dayang Belguri at Jonbeel, 5 km from Jagiroad in Morigaon District at the weekend of Magh Bihu. Though the origin of the Mela cannot be ascertained,it is held on the Friday after Magh Bihu.The first day of the Mela is marked by community fishing.

On January 18, this year's event was formally inaugurated by the Chief exectuive member of Tiwa (Lalung) Autonomous Council, Sri Rama Kanta Deuri along with other three executive members namely - Sri Pranabjyoti Manrang,Sri Jinaram Pator and Sri Pulal Brahma in presence of hundreds of hill tribes from the state including Meghalaya and plains people of different places of the state.

According to historical records, the Mela began not later than 15th century AD. The Mela portrays the unity of different ethnic groups.Tribals and non-tribals share their agricultural products in this Mela.During the Mela,the tribals come down from the hills to meet their relatives in the plains.

It is known from the local people that the Mela once lasted for a day and a night but now it is a three day event.It is interesting that Jonbeel- a large natural water body is named so as it is shaped like a cresent moon.

20 Feb 2008 - 11:23am | bobbyramakant
Negotiations toward a protocol on illicit tobacco trade to the global tobacco treaty, formally known as the World Health Organization Framework Convention on Tobacco Control (WHO FCTC), were held...