20 May 2017 - 2:37pm | Robertson Tanti
Attacks by wild elephants continue in villages along the India-Bhutan border in Assam's Udalguri district with three people being trampled to death within a week this month and several houses being... 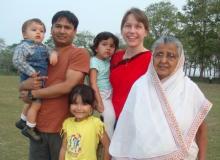 22 Jun 2012 - 9:08pm | editor
Altruism has been reported among bacterial population and among humans and other animals, like monkeys, and elephants. But in mammalian cells at the cellular level the idea of altruism has never been...