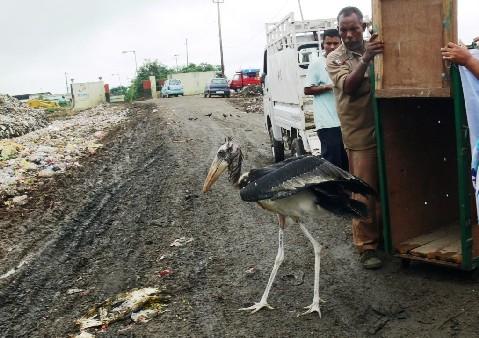 A sub-adult Greater adjutant stork, named Christina, was successfully released back to the nature on Saturday at Boragaon  near Deepar Beel in the outskirt of Guwahati city.

This bird was rescued few months back at Dadara of Kamrup District by a team of Aaranyak members and local villagers after it had fallen down from its tree-top nest. The seriously injured chick was later admitted at Assam State Zoo Veterinary hospital and treated successfully under the guidance of renowned wildlife veterinarian Dr. M.L. Smith.

Today this bird on being released back joined a flock of about 200 Greater Adjutant near Deepar Beel of Assam. “I am delighted to see so many Greater Adjutant together here today and I am sure the released bird would feel comfortable with its other member of its family”, said Dr. Smith.  Assistant Conservator of Forest of Assam Government Mr. Nripen Kalita witnessed the release of this bird and was overwhelmed to see how the bird  mingled readily with its relatives in the area.

“Greater Adjutant (Leptoptilos dubius) is an IUNC Redlist endangered bird and has about 1000 global population. Assam is its last stronghold. Saving a single bird is also a big contribution towards its conservation in global as well local level”, said Ms. Purnima Devi Barman, who heads Aaranyk’s Greater Adjutant Conservation Programme. Aaranyak has been working for conservation of the bird species for many years now in collaboration with local communities.

Robyn Dalzyn, Executive Manager in the CLP said "I am continually impressed by the commitment and dedication of Aaranyak team -- they will stop at nothing to care for this magnificent bird and ensure that every individual has the opportunity to thrive and live in harmony with  Dadara Village."

Christina was so excited to hear the news that her name was given to a bird which is globally endangered.  "I am very much honoured to share my name with a greater adjutant stork, especially having seen and appreciated the tremendous amount of care the community takes to protect this species. Congratulations to Purnima Devi Barman,Aaranyak and the CLP team for another successful chick release and to the community which has become a model for conservation”, Christina said today in a statement from United States.

“Aaranyak team had rescued several birds with the help of villagers from Dadara since last many years.  We are planning to give our best for conservation of this globally endangered species and we are committed to do so in all coming years. I request all my fellow conservation NGOs for their support in this endeavour” said Dr. Bibhab Kumar Secretary General of Aaranyak.

I am confident: CM

26 Jan 2015 - 6:00pm | editor
Hours after Tarun Gogoi allocated portfolios to his new council of ministers, the chief ministers exuded his confidence on Monday that the ministers would deliver the goods. Talking to reporters... 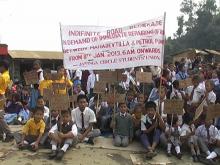