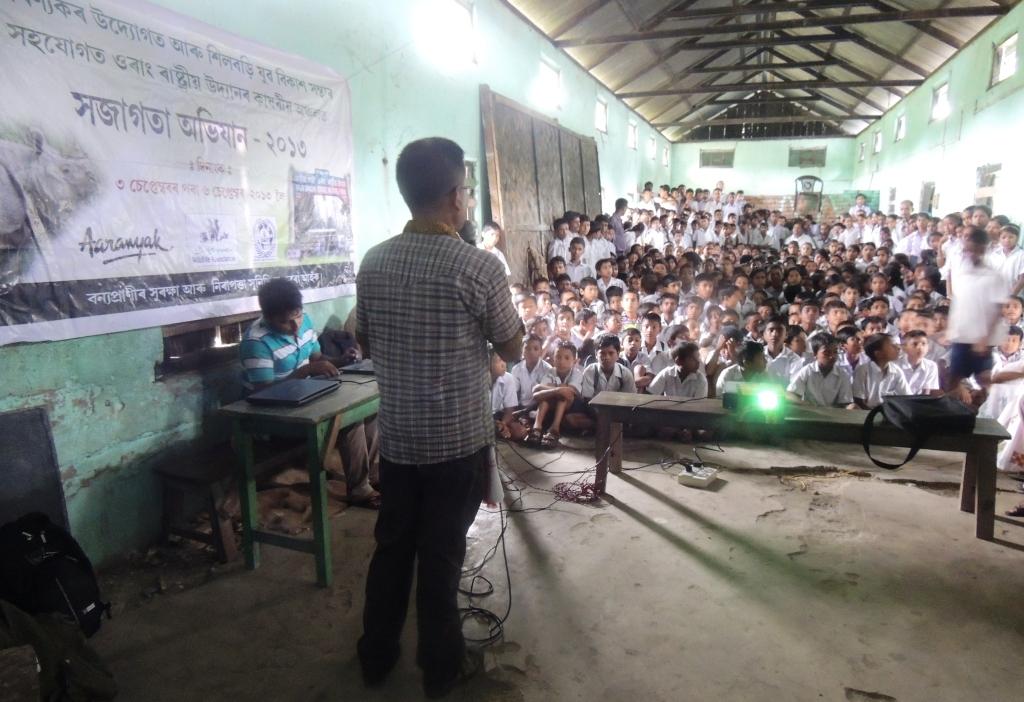 Aaranyak  has conducted a series of mass awareness campaign in the villages located in the fringe areas of Orang National Park in Darrang district of Assam  covering a cross-section of people from all age groups. The basic objective of the awareness campaign was to sensitise the people living in fringe area of Orang National Park about the need for conservation of wildlife habitat in Orang Park.

The first programme of the series was launched  on September 3 at Silbori Junior College, Orang where over 300 persons attended.

The day’s programme included a talk on biodiversity of Northeast India by Arif Hussain of Aaranyak , a talk on animal rescue by Uttam Saikia, Honorary Wildlife Warden of Kaziranga. Swapan Nath, a senior journalist gave a talk on Kaziranga National Park and its wildlife resources. There was also a documentary film show on wildlife conservation. Md Jakir Hussain, Principal of SJC College welcomes the gathering in the beginning of the programme.

Second such programme was held on the same day at Silbori Bazar, M H Club which was attended by over 500 persons. Highlights of this programme were a Street Play on conservation and a documentary film show on wildlife.

On 4th September, the team of Aaranyak organised two such programmes at Borsola ME School at Borsola and Borsola Higher Secondary School. A street pay on conservation was staged by the team at Borsola Bazar later in the day. All these programmes well very well attended by students  and staff of both the schools and public in general.

The sixth programme in the awareness campaign series was held on September 5 at Badlichar ME Madrasa School, Badlichar where over 800 students and school staff were present. The programmes included talk, power point presentation, documentary film show and street play.

The seventh programme was held on the later in the day at Sialmari High and ME School,  Sialmari in front of over 1100 students and staff of the school. The activities of the programme were similar to the earlier programme.

A street play on conservation was staged at Sialmari Bazar area later in the evening on September 5 where about 600 people stood witness to it.

The ninth programme in the series was held at Biscuti ME School, Biscuti on September 6  with over 200 participants. The activities included talks, power point presentation and documentary film show.

The closing programme of the series was held in the afternoon of September 6 at Sirajul Haque ME and High School, Silbori. There were over 800 participants in the programme that included a street play on conservation.

Rajiv Gandhi Orang National Park in Darrang district of Assam is spread over an area of 78.81 square kilometer on the North Bank of Brahmaputra River. It known for high density of its tiger population and the treasure trove of  one-horned rhino.

The number of tigers in the national park would have been much higher but for tiger poisoning cases reported from the park in recent years. Due to high density, tigers sometime stray out of the small park to kill cattle in fringe villages. The angry villagers retaliated through poisoning of tigers. As many as seven cases of tiger poisoning were reported during the last six years.

It is significant to note that in spite of tremendous pressure due to huge human and cattle population around the park, the tiger population is increasing. This may be attributed to good habitat and adequate prey base, besides strict protection measures in the park. Orang National Park has recorded more number of tigers than several tiger reserves in the country including Manas Tiger Reserve and Nameri Tiger Reserve  in Assam.

21 Sep 2008 - 10:49pm | Nanda Kirati Dewan
The third design ceremony of North East Institute of Fashion Technology (neIFT)-2008 was dedicated to a cause to creating awareness for breast cancer - the dreaded killer disease for women. Host...

19 Jun 2010 - 7:22pm | editor
A delegation of civil society is leaving for Delhi on Saturday to help ULFA and the government break the deadlock over the talk. Main organizer Dr Hiren Gohain is understood to have received a call...

Where are we heading to?

18 Aug 2008 - 2:17am | editor
I travelled to Orissa a few months back and saw the huge acres of forest land lying vacant. These are preserved under forest belt and natural resources of the State. In the tourism booklets, the...