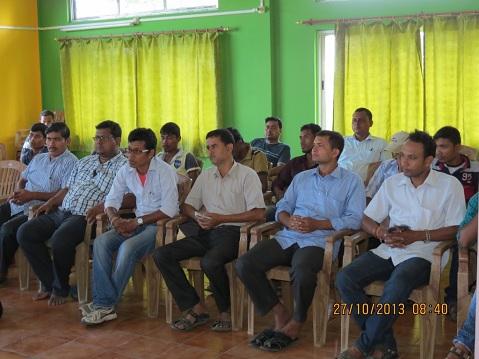 A two-day orientation workshop was organised at Pabitora Wildlife Sanctuary (WLS) for tourist guides under the aegis of Guwahati Wildlife Division in association with Aaranyak and Jeep Safari Association, Pabitora on October 26-27 last.

Setting workshop in motion, the DFO of Guwahati Wildlife Division  D D Gogoi mentioned about the important role Jeep Safari Association could play in uplifting the image of  the wildlife sanctuary so that it receives more visitors. He also spoke on rhino conservation efforts in   Assam with special reference to Pabitora  WLS which has the highest density of one-horned  rhinoceros on the globe.

Dr Bibhab Talukdar, secretary general of Aaranyak briefed the participants on the importance of conservation of wildlife   besides giving tips on bird watching given that Pabitora WLS is known to receive a large number of winged visitors every winter during a bird watching and filed visit to Tamuli  Dova within the wildlife protection area.

Additional Superintendent of Police of   Marigaon district, Hemanta Das sensitised the participants of the workshop about the importance of ensuring safety and security of tourists to the Pabitora  WLS  to make it a  most sought after destination. He said the tourist guides and Jeep Safari Association members could play a very important role in helping law enforcing agencies in this regard.

Circle Officer  of  Bhakatgaon Circle under Marigaon district, Dhiraj Saud explained about the importance of promoting tourism to build up the vital public support for conservation of wildlife.

29 Sep 2015 - 6:26pm | AT News Itanagar
Roads and bridges in West Siang district in Arunachal Pradesh are getting a facelift. The construction work of Concrete Cement Pavement road from Paktu Tinali to Pakam village is going on smoothly...

9 Jun 2017 - 6:24am | AT Kokrajhar Bureau
The All Bodo Students Union (ABSU)  has been preparing to observe 30th Bodoland movement martyrs day on June 12 at Bijni of Chirang district to mark the death anniversary of Sujit Narzary, first...