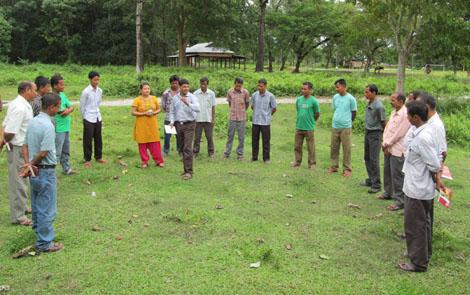 A group of teachers from areas close to Manas National Park (MNP) attended a day-long orientation programme on conservation education on Sunday last at Jharbari under Kokrajhar District.

Aaranyak, a society for biodiversity conservation in collaboration with Siknajhar Nounwgwr Adventure Tourism Society ( SNATS ) and Forest department Bodoland Territorial Council jointly organised the programme. Aaranyak took the initiative to organise the programme in pursuit of its goal to create a pool of ‘green teachers’ in the region so that they could sensitise the younger generation on the need for protection and preservation of our natural environment.

Dhrubajyoti Kalita a volunteer of Aaranyak enlightened the participants about the techniques of ‘no cost-low cost activities that are suitable for making conservation education joyful and practical. He displayed some materials developed with waste materials. During discussion he asked the participants to work in an organised way and to start activities based on own resources and capacity.

Jayanta Kumar Pathak, environment educator of Aaranyak discussed about method of environment education. He conducted number of group activities with the participants of the workshop. Namita Brahma researcher of Aaranyak interacted with the participants with special reference to Manas Tiger Reserve , about the importance of conservation of wildlife and habitat. Besides school teachers, officials from Forests Departments, Members of Local NGO, Secretary of Local unit of ABSU, President of Samaboy Samity attended the programme. Earlier, Bhuban Musahary, president of SNATS delivered welcomed the gathering.

The programme ended with an interactive session in which participants from different groups puts some valuable suggestions. It may the mentioned that it was the third programme that has been organised as part of a series of conservation education programme organised by Aaranyak in collaboration with BTC Forest Department in fringe villages of Manas Tiger Reserve.

14 Aug 2015 - 10:42am | AT News
Two hardcore NSCN-K militants were killed at an encounter with security forces in Nagaland a day before its Independence Day on Friday.According to information, the encounter with Assam Regiment took...

Footballer, 2 others dead in Manipur violence

31 Aug 2015 - 10:20pm | AT News
At least 3 persons including a footballer Paolianmang (23) died and more than 20 others sustained injury when a mob clashed with police in a remote area of Churachandpur in Manipur on Monday.The...