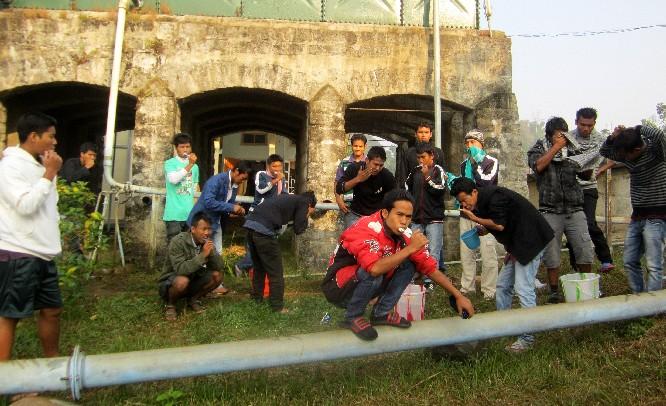 To register their protest against the PHE department, thirty boarders of Haflong Govt. College Boys Hostel went up to the PHE water-storage tank, near the minister's residence, and staged their unique protest by brushing their teeth on 11th December 2012, in the morning.

It is learnt that the Students at Haflong Govt. College Boys Hostel had to go without food and had to appear at their exams empty stomach due to lack of water supply by the PHE Department

Besides, the boarders at Haflong Govt. College Boys Hostel have also expressed dissatisfaction about the slow pace of boundary wall construction work. The construction of two main security gates has not even started. The boundary wall without the gates is useless, they pointed out.

The boarders have decided to stage similar protests against the concerned department(s) within this month if the construction work is further delayed. They have also threatened to use legal tools such as RTI (Right to Information Act. 2005) to go ahead with their demand if needed.

13 Aug 2011 - 1:05pm | SK Hasan
The ONGCL, Assam Asset continued to remain upbeat when it comes to achiving all the targets in the first quarter of the current fiscal (2011-2012) inspite of several diffulties. The Assam Asset...