Brisk preparations to celebrate I Day

13 Aug 2017 - 11:44am | AT News Guwahati
Defying rebel diktat, Assam is gearing up to celebrate the Independence Day with a massive security arrangement on Tuesday.  Police and para military forces are fanning in the nook and... 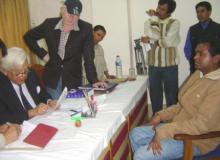 30 Jan 2008 - 3:23pm | editor
More than one hundred Adivasi people rushed to Guwahati on Wednesday to depose before the Justicer Manisana panel probing the Beltola incident but the chairman invited three of them to brief the...