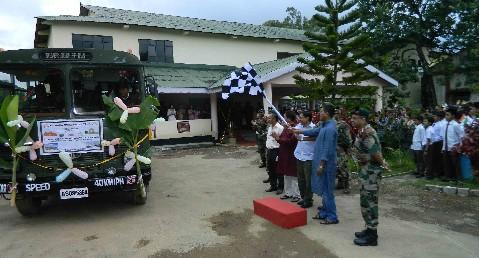 This Unique 15 day National Integration Tour is being organized by MADRAS REGIMENT under Sadbhavana funds of the Indian Army. The tour group comprises of 25 children and five teachers from the government schools located at Hajadisa, Langting, Laisong, Mahur, Haflong and Silchar, which come under Dima Hasao and Cachar districts of South Assam.

Due to the personal indulgence of Major General Satish Dua, Sena Medal, Inspector General Assam Rifles (East), the school going children will have an audience with ShriPranab Mukherjee, Honorable President of India on 06 July 2013.  The tour will give the children an opportunity to visit historic and tourist places as also educational institutes in and around Delhi thus giving them a broad perspective on the development and progress in the country in the fields of education, technology and infrastructure. During the tour they will be visiting iconic places like Lotus Temple, Qutub minar, Akshardham Temple, Purana Quila, Rashtrapati Bhawan, Nehru Museum, Red Fort, India Gate, Indira Gandhi Museum, Parliament House, Rail Museum, Manekshaw Center, National Science Center, TajMahal, Agra Fort, Dayalbagh Temple, Krishna Birth Place and Goverdhan Temple etc. In addition to these historic places they will be given chance to travel in Delhi Metro.

At the impressive flagging off ceremony by Shri Namrothang Hmar, Honorable Chairman, Dima Hasao Autonomous Council, the Chief Guest of the Occasion, exhorted all the school children to make full use of this education tour to enhance their knowledge, interact with their counterparts in the Northern part of our country and improve their awareness about the latest developments in the rest of the Nation. He also emphasized that children are the future of country and this innovative gesture by Inspector General Assam Rifles (East), would have a favorable effect on the impressionable minds of the children and will go a long way in molding their future. He also urged the school children to be part of the main stream and work hard for the progress and development of our great nation.

The large gathering of prominent citizens, school children, parents and government official lauded the efforts taken by Inspector General Assam Rifles (East), the Sector Headquarters and the conducting unit for their commendable efforts towards national integration, peace and development. It was perceived that this initiative will go a long way in enlightening the children of these remote areas on the development taking place in the country and motivate them to become responsible citizens of our great nation.

2 Dec 2010 - 3:22pm | editor
After virtually exposing health minister Akhil Gogoi targets Tarun Gogoi a day after the chiefminister took the RTI activist to the court with a defamation court.Addressing a press conference on...

30 Nov 2016 - 8:30pm | AT News
The killer AIDS seems to have taken a deep grip in Assam with 928 new HIV cases. According to the statistics available with the Assam State AIDS Control Society (ASACS), the disturbing scene has...

7 Jul 2010 - 2:31pm | editor
The Assam government will set up a state vigilance commission to deal with the corruption cases. The decision to set up this panel in the line of the Central Vigilance Commission was taken at a...