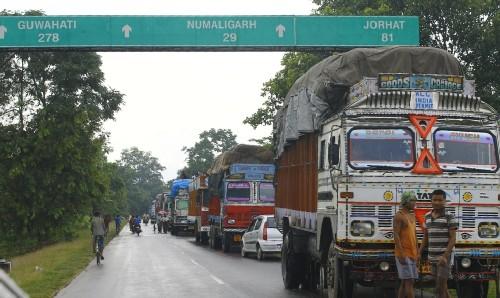 More than three hundred trucks carrying amenities to Nagaland had been stranded at Rangajan Tini Ali on NH-39 near Golaghat. Rangajan Tini Ali has virtually turned into an abode of trucks. Similar blockade is also going on at Merapani. The agitators are determined not to end the agitation at an early date without teaching a hard lesson to Nagaland. In a press meet held today at the site of the blockade the leaders of the organisations expressed that they will not end the blockade unless and until Nagaland doesn’t hand over the 250 Bighas of Assam’s land illegally occupied by them. They also expressed their anguish over the fact that the state govt. has still not shown any concern towards the people and poured their grievance that the local MLA Ajanta Neog has not taken out a little time to pay a visit neither to the Gorbasti area nor to the site of the blockade.

29 Aug 2012 - 2:51am | editor
Chief Minister Tarun Gogoi on Tuesday appeal to the political parties and organizations to refrain from calling bandhs saying that these wont help the matters. Addressing a press conference in...

Special train to B’lore on Saturday

30 Aug 2012 - 7:36pm | editor
A special train is scheduled to leave Guwahati for Bangalore on Saturday to carry the north east people who would be back to Karnataka to resume work.Addressing a press conference in Guwahati on...