One person was injured in Dhubri district and a few houses were torched in Chirang district in yet another string of untoward incident during the last 12 hours. According to police, the injured person hails from Chilkikhata, under Bilasipara police station who was attacked by a group of miscreants attacked. The condition of the injured is stated to be critical and he has been shifted to the Gauhati Medical College Hospital.

On the other hand, unidentified miscreants set ablaze three houses at Khunkrajora under Bijni police station in Chirang on Saturday night forcing the authorities to beef up security with additional forces. The Army is also conducting flag marches at various places.

7 Feb 2015 - 8:05pm | AT New Delhi
Much to a major relief for AAP, exit polls, mostly, predict 40-50 seats for Arvind Kejriwal and his party on Saturday. The exit polls put AAP ahead of its rivals BJP after the polling passed off...

24 Sep 2015 - 7:54am | AT News
Assam and Tripura communist parties will hit the street in protest against the deplorable road condition in both the north eastern states.The agitational programme will be launched at Luairpua in... 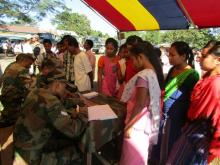 21 Nov 2016 - 10:53pm | AT Kokrajhar Bureau
A free health camp was organized at Jharbari in Kokrajhar district to facilitate remote  needy peoples in the region on Monday.  It was organized by Red Horns Division of Indian army. Over...