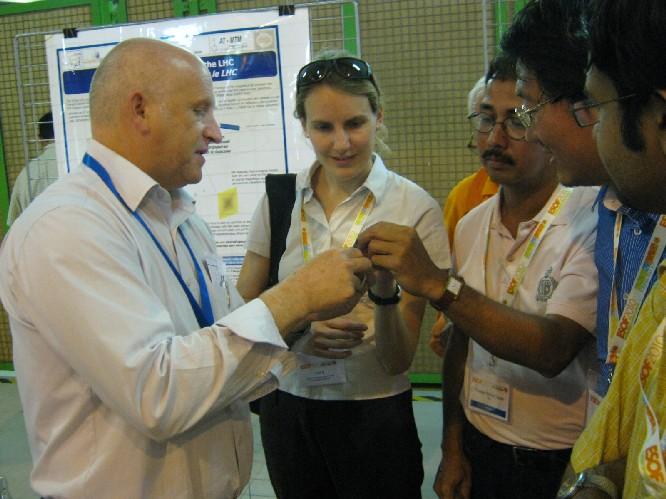 CERN will give update very soon on search for ‘God particle’. The elusive particle which is the theoretical missing link in the standard model of physics believed to be what gives objects mass. The European Organisation for Nuclear Research said few days ago it may announce on 4 July whether tests with its atom- smasher have found the elusive particle. The theory behind so called God particle is that mass does not derive from particles but less, if it all, with others. Researchers at the European Organization for Nuclear Research (CERN) are using their Large Hadron Collider (LHC), the world's biggest particle accelerator, to try to prove that the mystery particle really exists. It fires streams of protons in opposite, but parallel, directions in the tunnel. The beams are then bent by powerful magnets so that some of the protons collide in four giant labs, which are lined with detectors to record the sub-atomic debris that results.

CERN will hold a scientific seminar 4 July to deliver the latest update in the search for the Higgs boson. At this seminar, coming on the eve of this year’s major particle physics conference (ICHEP), in Melbourne, the ATLAS and CMS (two of four detectors in LHC) experiments will deliver the preliminary results of their 2012 data analysis. There has been widespread speculation that a major announcement on the Higgs, based on careful analysis of the most interesting of over 300 trillion proton collisions in the LHC so far this year, may be made at that gathering. The Higgs boson is predicted member of a class of subatomic particles named after British physicist Peter Higgs and Indian physicist S N Bose as a mechanism to explain the origin of mass. It also remains the last missing nugget of the Standard Model, a theory of physics that explains the behaviour of all subatomic particles observed so far and all forces in nature except gravity.

Last year when it was supposed to reveal the achievement some scientists said that their data were not strong enough for any conclusion. Now it is almost confirmed this major announcement on the Higgs, based on careful analysis of the most interesting of over 300 trillion proton collisions in the LHC so far this year, may be made at that gathering. Though there was no confirmation from CERN itself it is assumed that the organisation close to formally announcing it has discovered the particle and its linked energy field, thought to have given mass to matter and shape to the universe 13.7 billion years ago.

CERN spokesman James Gillies says the centre would want to make any important announcement, once there was something to say, in Geneva. "As for what ATLAS and CMS may or may not have in the 2012 data, that's only known to a few people in each experiment right now," he added. Researchers on the collider's separate ATLAS and CMS have been "blinded" - or cut off from findings from the rival team and even from different groups inside their own.

It is intriguing that both CMS and ATLAS are seeing a signal at nearby the same mass level. The latest result from the CMS group exclude with95 per cent confidence the existence of Higgs boson over a wide 1 GeV is nearly the mass of hydrogen atom. The Higgs boson has only a fleeting existence and is predicted to decay through multiple channel that create to decay through multiple channel that create other subatomic or fundamental particles. Physicists at CERN are hoping to catch a glimpse of the boson by spotting events or snapshots of its decay channel products. It is supposed that if the Higgs boson exists it is somewhere between 115 GeV and 127 GeV. The signals that CMS and ATLAS teams have seen are akin to tantalizing snapshots of something that looks like a chameleon in a forest. Researchers have been continuing refine their analysis for months to resolve the uncertainty.

A scientist in CERN said that they need to see what they have seen many more times before they can be sure of what they are really observing. But despite the similarities in the observations by CMS and ATLAS, there are also some differences in the results that needed to be solved. Unaccounted background may also explain the signals observed said an Indian scientist associated with CMS.

The ATLAS group has observed events that look like a Higgs boson with a mass of 112 GeV independently decaying into a pair of photons and four laptons and the analysis suggests that there is one percent chance by background. So far the information are disclosed, this is interesting but not enough to claim a discovery. For conclusive determination more data needed to show that the probability that the observed signal is due to background is 3 in 10 million. So no doubt new findings will bring a breakthrough.

Permalink Submitted by s a bourai on Wed, 04/07/2012 - 13:13
i am not a scientist but my sixth sence always supported the existence of god particles the birth giver to mass.thanks god.it appears that god particles are the software to produce hardware of mass

28 Nov 2010 - 2:18pm | Aiyushman Dutta
The East Zone eliminations for Livewire Mood Indigo, the annual rock fest of IIT Bombay, will be held at Gangtok on November 30 next. A number of bands from the Northeast have applied for...

25 Dec 2016 - 3:42pm | AT News
The All Assam Students Union(AASU) demanded early implementations of all clauses of historic Assam Accord along with deportation of illegal migrants from Assam. The students union obsrved Centenary...