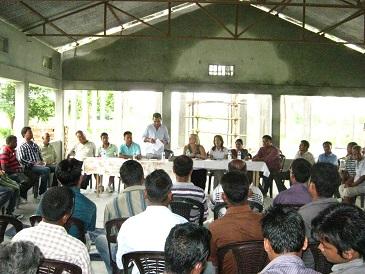 Elephants on the Line (EOL), a programme to reduce man-animal conflict along Indo-Bhutan in Assam, is showing results. Casualities on both sides came down to 90 percent with measures by EOL with the help of community, local administration, forest department, All Bodo Stuedents Union, Adivasi Students Union, local NGOs and various tea gardens in Udalguri district, said Jayanta Kumar Das, coordinator of the programme.  Udalguri district reports the highest HEC- related human and elephant death rates for the Bhutan-Indian transboundary elephant population, as well as the highest recent HEC death rates in Assam and India as a whole. Media and local forest department reported death of 13 people in 2012, 19 in 2013 and 22 in 2014 as against number of elephants death as 8 , 10 and 7 respectively. Elephants on the Line (EOL) is a program which serves as a guide for significant community-based conservation projects involving education, training, HEC prevention as short term goals while afforestation, fringe population welfare, creation of elephant refuges with water, fodder and shelter and other goals like reinstating corridors for safe elephant movements remain some of the long term initiatives, said conservation activist Mubina Akhtar.

Escalating man-elephant conflict continue to take a heavy toll on the pachyderm. At the root of the conflict lies rampant deforestation and large scale organised encroachment that drastically eroded and degraded elephant habitats. For the globally endengered Asian elephant, the Bhutan-India transboundary area holds specially significance, as it provides refuge to nearly 10% of the species' world population including 40% of India's remaining elephant population.

Elephants on the Line, a programme involving three countries---India, Bhutan and the United States is headed by Lisa Mills, North Carolina State University. The programme has a number of experts including-- Dr. Ellen Cheng, Heidi Riddle, Mamtha Satyanarayan, Jayanta Kumar Das, Mubina Akhtar, Dr KK Sarma, Sonam Wangdi from the three sides. Funded by the US Fish and Wildlife Service this community based programme is aimed basically to reduce the loss of human and elephant lives and the primary target area for the program is the region encompassing Udalguri district (in Assam, India) and southern Bhutan border areas. 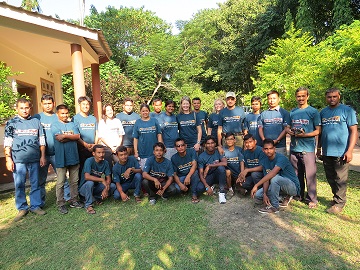 Elephants are attracted by the smell of brew that are locally made by villagers and tea garden communities. The pachyderm often break houses attracted by the smell.  EOl's advise not to prepare brew or store inside houses paid off.   The fringe communities of Nonoi and other forest reserves are strictly adhering to the EOL guidelines like not to construct any structure on traditional elephant migration routes, not to enter the forest where there are elephants present to collect firewood or fodder during the early morning and late afternoon, not to try to drive wild elephants alone, not to go out of their houses alone and without a torchlight at night etc. Further, EOL advises villagers to stay away from a bull in musth. They are dangerous and can charge from a distance, mother with baby can attack fearing harm etc. EOL also appeal to communities not to tease wild elephants by pelting stones or throwing torchlight beam etc.

Recently, the forest department and tea garden authorities have agreed to create forests agreeing to a proposal by EOL in the area as an elephant . It is to be noted that hundreds of hectares of forest was cleared in the last two decades by encroachers and timber traders.

Permalink Submitted by Sergeant Bikash on Sat, 05/12/2020 - 18:57
Wheres USA grant for Asian Wild elephant for 24 months at 10,000 $ pm *24 months= 2,40,000 US$ perished from Udalguri? How this money came bypassing Govt Foreign fund policy & without bank account? The grant ceased for failure to submit audit report. Physically nothing has been done. Who are culprit? This Jayanta Kr Das is a fake wild life activist. He himself is a trafficker, Known to fell big trees for making quick money. Hope justice will be done. The amount in more than ₹15 crores!

Court says no to bail plea of Ripun, 2 others

21 Jun 2008 - 8:05pm | editor
The court of R K Jain in Delhi court on Saturday rejected the bail petitions of sacked education minister Ripun Bora and two of his associates and extended their judicial remand by July 5. Before...

9 Aug 2008 - 7:50pm | Daya Nath Singh
The deteriorating political and law and order situation in Assam and involvement of political leaders in dividing the society for their personal or party's interest has compelled the citizens to...