Retirement age up by one year

The retirement age of Assam government employees rises up to 60 years. The order was issued on Tuesday to come into effect from November 30.

According to official estimates, more than 6000 employees will benefit from this extension who reach their superannuation.

The Assam government raised the retirement age to 59 from 58 years just before the last Assembly polls in 2005. 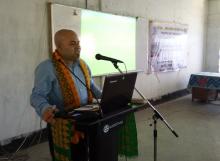 19 Oct 2017 - 9:42am | AT News
Department of Bodo of Chaiduar College organised one day youth motivational programme on good social regeneration for the students at the college campus on 18th October. It was organised to...