Several activists of the All Assam Koch Rajbanshi Students Union of Biswajit faction have been arrested on Friday while they were staging fast unto death demanding a separate Kamatapur. The student body has called for one thousand hour Kamatapur bandh from sixteenth of December in protest against the arrest.

The activists of Biswajit faction of the All Assam Koch Rajbanshi Students Union was staging fast unto death. They dropped the demand for schedule tribe status and instead reiterated a separate Kamatapur to uplift their social, political and economic conditions. But it was not allowed by the police to carry on citing the promulgation of the 144CRPC—clamped in the city following the Beltola violence on twenty fourth of November. Police and para military troops prevented some activists on the way to the Lakhidhar Bora premises in the early hours. Some CRPF jawans were also deployed at the demonstration site. The police arrested a few AKRSU activists in the Panbazar area.

Following this, nobody was seen there at the site. But a few hours later, some activists led by AKRSU general secretary Pradip Rai arrived near Dighalipukhuri and started staging fast unto death on the foot path. The protestors shouted slogans demanding separate Kamatapur for their overall well being.

Minutes after they began the demonstration, city police superintendent Jitmal Doley, officer in charge with the Panbazar police station Mahendra Rajkhowa with one of his officers Utpal Bayan reached the spot and arrested the protestors charging with violating the 144 CRPC. 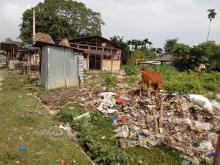 17 Oct 2017 - 8:11am | Akshaya Pranab Kalita
A filthy surrounding in and around the  BVFCL Fertilizer unit has raised serious doubts over the sincerity of the authority to keep the area clean.  BVFCL Fertilizer, the single unit in...