Raha Adarsh Sishu Vikash Kendra, a pioneer private educational institution of Raha, situated in the heart of Raha town is going to celebrate its ‘Silver Jubilee Year‘ throughout 2012-2013. The school which started functioning from February 10,1988 stepped into its 25 th year this February, the Head Mistress of the school Poli Deka said to the Assam Times. In these 25 years , thousands of students from across Raha got educated from this institution and are serving the society and nation penetrating every layer of the society.

The inauguration programme of the Silver Jubilee celebration will begin with the hoisting of flag at 8 am by Loknath Knowar, president of the celebration committee, followed by Vanti Prajyalan by Gunemai Gogoi, founder and former headmistress of the school. ‘ Smriti Tarpan will be performed 9 am by Kamal Chandra Sharma, ex-principal of Raha H.S .School and executive president of the Silver Jubilee celebration committee followed by a harmony of music show ‘ Samalay’ directed by Harendra Nath Bora. An informal talk programme of the parents and students of the school will also held at 10.30 a.m. It will be carried on by Rajashree Bora Hazarika, Professor, Modern Indian Languages, Raha college.

The open meeting will be held at 1 pm. It will be presided over by Loknath Konwar,president , Silver Jubilee celebration committee. Dr Anjanjyoti Choudhori, will inaugurate the meeting where Piyush Hazarika , MLA , Raha will attend as chief guest. It will be followed by a felicitation programme at 2 pm. A cultural programme by the students of the school will also be held from 3 pm onwards.

Poli Deka, Headmistress of the school and the silver jubilee celebration committee has appealed to all the present and past students along with their parents , the local residents, well-wishers to extend their valuable co-operation in all the programmes and to attend the Silver Jubilee Inauguration celebration.

Permalink Submitted by Dipjyoti Kakati on Tue, 28/02/2012 - 03:00
Please add an option so that the news items published in this page can be shared in facebook and other such social networking sites. With lots of regards Dipjyoti Kakati Raha, Nagaon, Assam 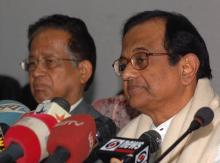 PC gets tough with ULFA, NDFB

2 Jan 2009 - 10:36pm | editor
Union Home Minister P Chidambaram on Friday said no quarter will be given to militancy and hoped Bangladesh will make a "new beginning" by denying sanctuary to ULFA and NDFB.Chidambaram told...

22 Feb 2015 - 6:58pm | Inamul Islam
Assam mobile theatre pioneer Adya Sarma passes away on Sunday. He was 75. The end came at 12 noon at a local nursing home in Nalbari where he was admitted a few days back. As soon as the news of...