Stung by the cry for PresidentÃ¢â‚¬â„¢s Rule, Dispur is contemplating to corner Prafulla Kumar Mahanta by reopening the LoC scam beside making the Justice KN Saikia Report public.

Reliable sources in the Rajiv Bhawan here say the Assam Government may approach the CBI to implicate the former Chief Minister in the multi-crore scam in the animal husbandry and veterinary department where the investigating agency was denied permission by the then Governor Lt General (Retd) S K Sinha.

Now the entire move is in the light of a SupremeÃ‚Â Ã‚Â Ã‚Â Ã‚Â  Court verdict that the CBI needs no permission to prosecute a public servant, say sources adding that if the CBI reopens the file, Mr Mahanta could land in trouble.

Besides, the Assam Government may make the part of the Secret Killing Report public, where Mr Mahanta is widely believed to be indicted. The Justice K N Saikia Commission has already submitted two reports before the Chief Minister which are being kept pending.

On the other hand, there is widespread demand to make the report public from several quarters which could put the former Chief Minister in peril. The Saikia panel is inquiring into the extra judicial killings that took place during Mr MahantaÃ¢â‚¬â„¢s regime. The demand is also from within the regional party which he was leading for many years till he floated the Asom Gana Parishad (Prgatishil).

Informed sources here say, the Commission is almost finalizing the final report of the probe in to the secret killings which took place during Mr MahantaÃ¢â‚¬â„¢s tenure. The commission will finalise the report by the first week of July to place before the Chief Minister in August.Ã‚Â Ã‚Â

According to Mr Mahanta, the Tarun Gogoi Government has been failing to ensure security for the people. Everyday there is incidents of blast, shoot out and what not. All these are clear indication of Mr GogoiÃ¢â‚¬â„¢s failure to deal with the situation. 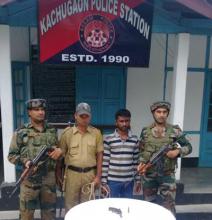 18 Apr 2016 - 8:35pm | AT Kokrajhar Bureau
Security forces belonging to police and army, in a joint operation arrested a cadre of National Santhali Liberation Army (NSLA) from Kashiabari area in Kokrajhar district on Monday. The cadre was...