“Gone, but not forgotten, never shall thy memory fade. Oh, Martyrs, we salute you”, these are the words inscribed in the memorial tomb constructed in memory of the 140 peasant martyrs who sacrificed their lives in the hands of tyrant British rulers on January 28 of 1894 at the historic peasants uprising at a small village of Pothorughat, 16 km to the west from Mangaldai in Darrang district. J R Berington, officiating commandant of the military police, who ordered the firing against hundreds at Pothorughat when they protested against the British government policy of imposing exorbitant taxes.But Pothorughat residents' aspiration for giving national recognition to this event like the Jallianwala Bagh massacre on April 13, 1919, is yet to be fulfilled. Although the Pothorughat massacre occurred long before the Jallianwala Bagh massacre, it was only since 2000, the army has been paying homage to the martyrs on January 29 every year .The supreme sacrifice offered by 140 common peasants belonging to both the Hindu and Muslim community leaving aside their religion at the cruel hands of the British rulers while raising a protest that too in a non violent way is a benchmark of the history of freedom struggle of our motherland and this glorious chapter of the history of freedom struggle of our motherland should get due recognition in the national level.

This year also under the stewardship of Commander of 21 Mountain (Artillery) Brigade Brigadier VK Tiwari, 2 Field Regiment operating in Darrang district organized a sanguine ceremony to pay homage to the martyrs with full military honour on January 29. The decorated memorial witnessed a massive out pour of humanity where people cutting across all divisions assembled in silent reverence. GOC Red Horns Division, Major General Ravi Nair, while attending this pious and sacred function as the chief guest today offered floral wreath on the memorial tomb. In his speech he highlighted the importance and significance of this historic event in our lives and urged one and all to work towards the greater prosperity and progress of Assam. Significantly, later on being asked about inviting the Chief of the Staff of Indian Army next year to give it a national recognition, Maj Gen Nair talking to the mediapersons said that he would take up the matter with his senior officials to arrange for the visit of the General in near future. Maj Gen Ravi Nair in his first public function since taking over the command of Red Horns Division also got the inauguration of the Children Park constructed by the Red Horns division under Operation Sadbhavana done by a village child today.

On this auspicious moment, the Indian Army deeply recalled veteran freedom fighter late Pani Ram Das who was always the guest of honour in the homage paying ceremony organized in the previous years since 2001. The glittering function was witnessed by a large gathering of 3,000 people from Darrang district. The efforts of the Red Horns Division to keep this yearly tradition alive with such pomp and show have been appreciated by the general public.

It needs mention that the troops of Red Horns Division at the initiative of the then Governor of Assam Lieutenant General (Retired) SK Sinha, came forward with the novel idea of construction of the memorial tomb in the year 2001. Since then the ‘Men in Olive Green’ of Red Horns Division has been celebrating the day in a befitting manner spreading the message and the meaning of the hard earned freedom. Moreover,a history of Patharughat was also authored by noted writer Arup Kumar Dutta (was released in 2010 ) with the initiative of then Darrang district deputy commissioner Dhruba Hazarika.

Permalink Submitted by Anoy Anit on Tue, 31/01/2012 - 20:20
One of the greatest event of India's freedom struggle history being neglected by both India and Assam government.Thanks to Red Horn Division of Indian Army,who showed respect to the 140 peasants who sacrificed their lives for our present.Also thanks to Army for showing respect to noted freedom fighter of Assam,late Pani Ram Das of Kalaigaon Sevashram,whose contribution to India's freedom struggle yet to be recognised. 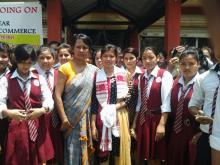 2 Jun 2016 - 9:03pm | SK Hasan
Geetashri Rajkumari from  Swaraj Acadamy, Nazira secured 10th position in the HS Arts 2016 with 468 marks. Different organisations feliciated her for her achievement. She is the daughter of late...

25 Feb 2018 - 10:34am | AT News
TURA: Security forces in and around Adangpak village in the East Garo Hills of Meghalaya are continuing the massive operation in search of another dreaded north eastern rebel leader a day after they...