Became a Fellow of the Royal College of Surgeons of England in 1978 (F.R.C.S) 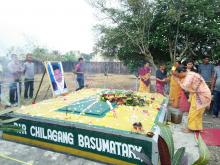 29 Jun 2017 - 11:19am | AT Kokrajhar Bureau
Contributions of Bir Chilagang Basumatary, founder chairman of the now defunct Bodo Liberation Tiger (BLT) was remembered towards the Bodoland movement, who revolt with arms...

20 Feb 2019 - 12:17pm | AT News
“Conservation of wetlands plays a vital role in ecosystem and vegetation development. The wetlands of Kaziranga support spectacular concentration of wildlife like the Great One-horned Rhino, Water...

26 Jan 2014 - 10:01am | AT News
Governor JB Patnaik urged the militant groups to join the national mainstream to help the state develop.Unfurling the tricolor at the Veterinary Playground in Khanapara on Sunday morning, the...