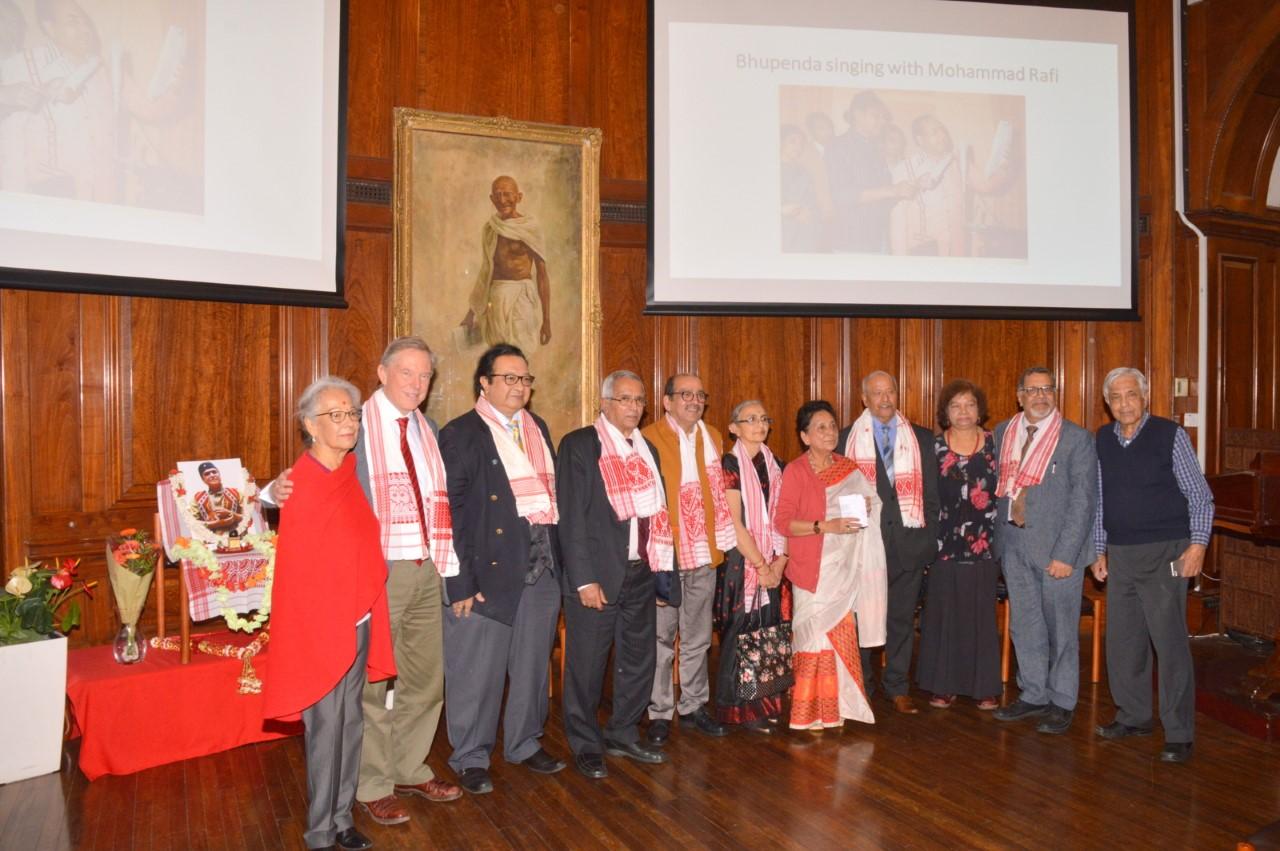 Dr. Nilmoni Sikdar, Bhabani Kakati, Sandip Sen and Shahadat sang the beautiful songs of Bhupen da were rendered in Assamese, Bengali and Hindi.The highlight of the event was 'Namami Brahmaputra' dance was performed by Ragasudha Vinjamuri and has also presented the Indian Classical Dance eight times on different themes and occasions at the Houses of British Parliament. Bihu dance was performed by Lata Upadhya and joined by the crowd.

Brahmaputra, Bihu and Bhupen - The 3 B's that constitute the Nortrh-East.The restless jajabor or wanderer, the great cultural hero, the great Assamese, the believer in the power of the nation is no more. Now that mighty voice has fallen silent. Assam is poorer for it. The world is poorer for it.

The doyen of Assamese culture, wanted to dispel the age-old anathema of racism and communalism through his works and drew inspirations from a plethora of socio-cultural events as well as a galaxy of great personalities of the world. Often hailed as a visionary, Dr. Hazarika was greatly influenced  among others by Karl Marx, Maxim Gorky, Lenin, Paul Robeson, Martin Luther King, Abraham Lincoln, Nelson Mandela and Mahatma Gandhi.

The themes of social justice and revolution crystallised at a defining moment in  Hazarika's life when he befriended US civil rights activist Paul Robeson, who told him the guitar was not just a musical instrument but an instrument for social change. Under Robeson's influence, Hazarika wrote and set to tune the evergreen Assamese song "Bistirno Parare" ("Bistirno Dupare" in Bengali and  " Ganga Behti ho kyon" in Hindi that had an echo of Roberson' masterpiece , "O Man River"

A  poet and lyricist whose vision has always been uncompromisingly humanistic. It is no doubt for this reason that his music has always been relevant, no matter at what point of time the lyrics were originally penned, no matter what language they have been later translated into, no matter what culture away from the once tranquil now turbulent lifestyle beside his beloved Luit ( The river Brahmaputra)

We must celebrate his life. We must establish his place in the soul of humanity, whether it be India or UK. We must echo his belief that we are all one, we need to reclaim the voice which once spoke of and inspired the working classes, by singing his songs and carrying his flag - "Ami Asomiya Nohou Dukhiya".