Addressing a press conference in Guwahati on Friday, Gogoi said it is only BJP which has institutionalized corruption. Gogoi said time and again BJP has been facing corruption charges in the country.

Gogoi also criticised Advani for opposing the land deal with Bangladesh saying that the senior BJP leader does not know how the deal would benefit the north eastern region.

He charged the erstwhile NDA government with not doing enough to Assam and its neighbouring north eastern states. 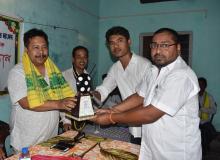 14 Jun 2019 - 9:59am | Shajid Khan
UDALGURI: The Non-bodo people living in the BTC region have been deprived of their due rights in BTC region and it is only through acquiring political power that the people could readdress their...

29 Dec 2014 - 4:58pm | AT News
Translation holds the key to take the literature in to a new high. But the works should maintain a high standard of quality. These are more or less of what authors, journalists and publishers said on...