Golaghat town came to a standstill on Friday when nearly five thousand people of all ages marched to the town bearing the scorching heat to attend a mass rally organized by KMSS (Krishak Mukti Sangram Samiti) against the construction of Big Dam at Lower Subansiri and the transfer of land to Bangladesh. Addressing the rally Akhil Gogoi, General Secretary of KMSS severely criticized the role of the state govt. in providing land rights to Bangladesh. Addressing the gathering, Gogoi said that while the illegal migration from Bangladesh has continued to be a key issue which has long term impact in both demographic and political stability of Assam, the land transfer to Bangladesh through a bilateral treaty, also endorsed by Chief Minister Tarun Gogoi is unequivocally condemned by each and everybody in Assam. The recent land transfer deal is a repetition of Redcliff Plan of 1947.

The KMSS disagree with this land transfer and urge the Prime Minister to immediately scrap this agreement. On the issue of Lower Subansiri Hydro Power Project, Gogoi said that we have raised serious concerns over the construction of big dam and which has been endorsed by the eminent scientists that the river system is fragile in North-east India. Its geology is too young to be challenged by the mankind. He urged the Govt. to scrap the Lower Subansiri Project and engage in meaningful discussion about the ecological aspects of the region. He further urged the government to formulate policies for ecologically viable mini dams where communities will have full right over natural resources. After the rally the KMSS also submitted a memorandum through the Deputy Commissioner of Golaghat Dist. to the Prime Minister of India, with the demands to scrap both the Lower Subasiri Hydro Power Project, Indo-Bangladesh land swap deal and implementation of Forest Rights Act, 2006. 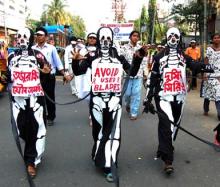 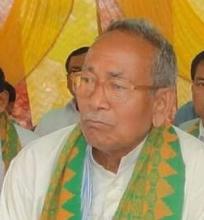 17 May 2017 - 9:04am | AT Kokrajhar Bureau
A pall of gloom descends in Kokrajhar and it's adjoining BTAD districts when noted Bodo leader Someswar Brahma died after a massive cardiac arrest at hospital in Siliguri on Friday night. He was 70...

19 Nov 2014 - 10:21pm | AT News
There is no respite for Sadananda Gogoi. A special court on Wednesday refused to grant bail for the singer whom CBI arrested in connection with the Saradha scam.After accepting CBI’s prayer, the...
Follow @Assam Times