In continuing support for Anna Hazare in his fight for a strong Lokpal Bill , people from various walks of life , including students from different schools and colleges of Raha, under the banner of the All Assam Students’ Union, ( AASU ) Raha unit today took out a massive rally in support of fasting Anna Hazare against corruption in public life.

Talking to this newspaper Mridul Hazarika , President, Nagaon district AASU unit said "It may be a small gesture in support of Hazare. But it has the spark to ignite other minds, creating a mass movement to bring about change”.

Utpal Das and Simpy Deka , both class X students of Raha Shankardev Sishu Vidya Nikean, said, “ We understand the importance of Jan Lokpal Bill and the bad effects of corruption in the society.So we have come to join this rally with our friends willingly and we are not forced by anyone to join the rally.”

Aziz Ahmed, a third year student of Raha Fishery College said, “"The entire system is stinking and the country is becoming number one in corruption. No work gets done in offices, unless a bribe is given which is why I have come with my friends to join this rally to raise my voice against corruption.”

Another fourth year student of Fishery College , Arunima Deka said this News Paper, “This is one humble step. We need more such initiatives and Anna Hazares to end the flow of tainted money, "We must not end the fight here. People must get justice”.

Though the organisers expected only hundreds of people but they witnessed a massive show of strength of people who came spontaneously to voice against corruption.

The students condemned the Prime Minister and the Centra Government for prolonging the issue instead of placing the Bill in the parliament.

17 May 2008 - 1:57pm | editor
A hardcore ULFA rebel, Montu Borgohain, was killed during an operation by army in upper Assam's Dibrugarh district on late Friday night. According to information, the incident took place at Nagajan... 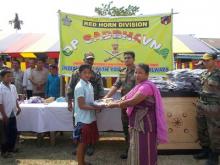