One Mintu Ahmed of Panikheti village was caught stealing telephone cables from Uzaragaon village by the residents of the area in the night. The accused was caught, thrashed by the public, and tied up inside the village library. The police arrived in the morning and found the person dead. After this, the villagers came out from Panikheti, Pakhimuria area and burnt 4 houses, damaged vehicles in Uzaragaon village. Around 10 persons were injured in the violence. Police and security personnel have been deployed in large numbers to control the situation. 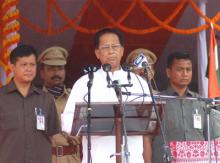