Rampant smuggling of subsidized kerosene (SK) oil is going on in the border districts of Assam.

The illegal trade is carrying out by procuring SK oil though fake ration cards. Major chunk of SK oil meant for Public Distribution System (PDS) in the state is being smuggled to Nagaland and neighbouring Bangladesh.

More than 50 % of the SK oil meant for PDS is released in the black market mostly in the districts which shares inter-state borders with Nagaland.

The illegal trade is carrying out by unholy nexus of food and civil supplies department officials and SK oil deport owners. Even railway officials are also involved in it as SK oil consignments are very often smuggled though trains to the business capital of Nagaland, Dimapur from Golaghat district.

Sources in the food civil supplies and consumer affairs department told this newspaper that against one family identification card (ration card) the allotment of SK oil is 4.5 litres. But around 50 % of the SK oil in the bordering districts of Golaghat, Jorhat and Sivasagar is released in the black market for sale in Nagaland territories.

According to the food civil supplies and consumer affairs department figures, SK oil procurement from January to December this year by the department is 27, 344 kilolitres whereas the present demand of SK oil in the state is 56,108 kilolitres. Which means a shortfall of 27,760 kilolitres is still in Assam.

In a situation when there is huge mismatch of demand and supply of SK oil, half of the quantity of SK oil meant for three districts of the state being smuggled to other state is a matter of grave concern, feels Asom Jatiyatawadi Yuba Chattra Parishad (AJYCP) president Manoj Baruah.

Baruah who is associated with several agitations against the alleged corrupt practice going on in the PDS in the state said the food and civil supplies department is fully responsible for the smuggling of SK oil out of the state.

“Besides the food and civil supplies department the district administrations should be equally blamed for failing to keep a track on the PDS in their respective districts. We want a high level inquiry to this matter and the state government has ensured that the SK oil which is meant for the poor people should be sale in the black market,” he said.

Sources in the food civil supplies and consumer affairs department told this correspondent that normally some 36,000 litres of SK oil is allotted in month to one Gaon Panchayat Samabai Samity (GPSS) in the three districts of Sivasagar, Jorhat and Golaghat which share borders with Nagaland.

Sources in the department also said out of these 36,000 litres some 18,000 litres are smuggled to Nagaland. In amount of money a sum of Rs 5.4 lakh of SK oil is being released to black market in month.

Same is the case with Karimganj and Dhubri districts of Assam which share borders with Bangladesh.

Here also SK oil is smuggled to Bangladesh territories and sold at more Rs 50 per litre. SK oil meant for PDS in Assam is in great demand in Bangladesh as kerosene is used as fuel to run the motorized country boats in that country.

Smuggling mainly takes place by the river routes though Steamer Ghat of Karimganj district of Assam.

30 Jul 2008 - 1:25pm | editor
An uneasy situation is prevails along the Assam-Nagaland border in Golaghat district as a section of people from the neighbouring Nagaland are illegally occupying a vast plot falling under the... 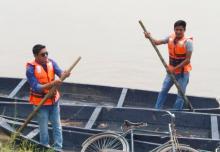 Initiatives of flood preparedness by distributing country boats in Majuli

5 Jul 2021 - 6:04pm | Ranjan K Baruah
In the time of world Covid-19 crisis, Assam is not exceptional, people of the state specially people from rural areas and flood prone areas affected by this pandemic most. Majuli the world’s largest...