An LPG Cylinder of domestic use got burst  on Thursday night at the house of one Ibrahim Ali. Injuring 5 persons of the family  during the blast. The injured are being treated in Nagaon Civil Hospital. The blast occurred while the houselady was cooking. People sitting at the dining table got injured. Due to the intensity of the blast the brick wall of the kitchen got damaged.

15 Dec 2015 - 4:33am | AT News
The Dr Bhupen Hazarika Foundation (BHF) is an initiative of Bhupen Da’s son Tej Hazarika and family members, several other admirers and followers of Bhupen Da across the globe to preserve the legacy... 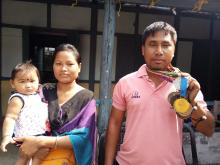 13 May 2017 - 9:06am | AT Kokrajhar Bureau
It's hard to believe but true. An award winning  archer in Assam has no option to be an auto driver to survive. Yes, he is none other than Kansai Borgoyari whom the people in his home district...