While talking to Assam Times, Mr Nanda Kirati Dewan, Publicity Secretary of AAGSU said that the main issue of the conference was to reassert the demand for a Gorkha Autonomous Council and to adopt severe democratic agitation if there is not fulfilled by the government. He further added that the demand for a Gorkha Autonomous Council had been placed way back in 2002 for the all round development of a nearly 30 lakh Gorkha people residing in the state. The govt. however submitting to the demands had set up a Gorkha Development council in 2010 but the people are not satisfied with it as the council had failed to leave up to the expectations of Gorkha people. Moreover the Council functions on the directions of the government which many a times act as a deterrent towards the welfare of the Gorkha people. So, the AAGSU has demanded for an elected Gorkha Autonomous Council to fulfill their long standing demands and aspirations of the Gorkha people. 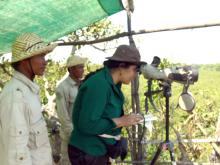 28 Jan 2013 - 6:28pm | AT News
Aaranyak’s wildlife biologist, Purnima Devi Barman who has been working continuously on conservation of Greater Adjutant Stork species has completed an international field training in a remote forest...

15 Jun 2008 - 5:45pm | editor
The Assam Government’s claim over Langpih gets more teeth as the Gauhati High Court has asked the Meghalaya government to a compensate an amount of Rs 1 lakh each to three residents of the area...