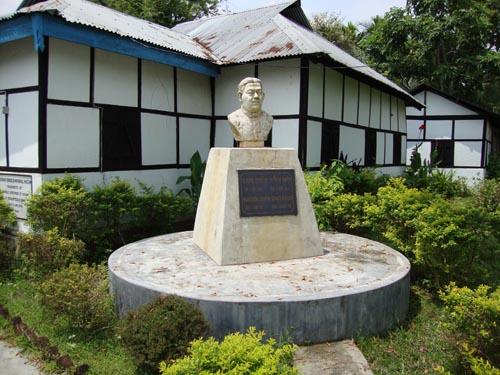 At a time when the country is ruled by the Congress party both in centre and in state , the residence turned museum of the first Congress Chief Minister of Assam Lokopriya Gopinath Bordoloi remains in dilapidated state at Raha.The memorial museum which was established in the year 1998 in the Raha State dispensary premises becomes a proof that the government of Assam is not interested to preserve the memory of this great son of Assam who was instrumental in establishing Guwahati University, High Court of Assam, Assam Medical College, Assam Veterinary College etc. Not only this , this courageous son of Assam played a major role in securing the future of Assam which would have been included in East Pakistan otherwise.

As leader of the opposition in the Assam Legislature before 1937, Gopinath was trenchant in his criticism of Governmental policies. When the first Congress Ministry was formed in Assam in 1938 he became the Chief Minister and took the education portfolio. One of the greatest achievement of Gopinath during this first ministry was the prohibition of opium in Assam. He particularly stressed the economic of its vast natural resources and wanted a fair deal for Assam. He was never tired of pleading with the Central Government for Assam’s legitimate share in the revenues accruing from oil, tea and other natural resources and in industrial development. He always asserted greater autonomy for States. Because of his stature in all- India politics his views were quite effective.

Tall, elegant and handsome Bordoloi was a socialist of the Gandhian type and wanted an egalitarian society based on justice and fairplay. He was also very progressive in the matter of relationship between the different linguistic and cultural groups in Assam. He looked like a tribal ‘gaonbura’. He was simple in his dress and always wore Khadi. He was suave in manners and beneath his rough exterior there was the softness of humility. He was a deeply religious man, being particulary influenced by the Gita. He was also a good singer and used to sing Vaishnava devotional songs.

The far-sighted Bordoloi was born on 6 June 1890 at Raha. His father was Buddheswar Bordoloi and mother Praneswari Bordoloi. His father was a government doctor at Raha state dispensary while Bordoloi was born. He lost his mother when he was only 12 years old. He got admitted in Cotton College after passing matriculation in 1907. He passed I.A. in 1st Div. In 1909 and took admission in the renowned Scottish College,Culcatta College and graduated in 1911. He then passed M.A. from Calcutta University in 1914. He studied Law for 3 years but came back to Guwahati without sitting in the final examination. Then on request of Tarun Ram Phukan, he took up the temporary job as Headmaster of Sonaram High School. During that period, he sat and passed in the Law examination and started practising in 1917 in Guwahati.

The house in which he was born and spent his early life before shifting along with his father to Guwahati was later turned into a museum by the government of Assam in 1998 respecting the appeal made by the people of Raha for the same. The museum was inaugurated by the then Governor of Assam S.K. Sinha on June 6 in the said year. But due to the negligence of the state government the museum is on its death bed.The damaged compound walls, rusted iron gate and filth all over the area greet visitors to the place in a way which is inexplicable.

The museum has rare collection of many important objects including the dresses made of khadi cloaths worn by him, Gandhi cap,wrist watch,letters written to Bordoloi by Mahatma Gandhi, various awards given to him by several organizatioons of the country,Khamti bag,Bordoloi's shaving equipments,handkersief,photos,kopahi sadar,etc. Besides all these articles related to Bordoloi,there are also a good number of articles used by his wife Surabala Bordoloi showcasing the glory of their past lives.

Though all these articles have a good archaeological importance but neither the government nor the local administration nor any so called socio-cultural organization have yet come forward to preserve these rare objects scientifically as a result of which these antique objects are going to be destroyed by dust,insects,rain etc.The museum is still lodged in a single room wiith no ceiling in it and almost out of notice of the public. In a hot weather it becomes impossible to enter the museum as there is no facility to send out the hot air inside from the museum.Most of the priceless articles have been kept in a haphazard manner in the room owning to inadequate space. In addition to all these there is no drinking water facility,toilet facility for the visitors as well as the caretakers of the museum.

What is more shoking is that the government has appointed three caretakers but due to the dilapidated condition of their official residence,they have been passing their nights on the museum floor for last several months.They even celebrate the birth day of this great son of Assam themselves alone. Every year on June 6 they lit earthen lamp before Bordoloi's statue at their own cost as they are not provided any fund for this celebration by the concerned authority. Hence, The conscious residents of Raha have therefore requested the Government and the concerned authority including the district administration to come forward in general and Lokopriya's son Rabin Bordoloi,an MLA of the present governmet of Assam, in particular to take the subject seriously and come forward to save the museum from its dying state as soon as they could.

2 Dec 2017 - 3:40pm | AT News
GUWAHATI:Senior Congress leader and former chief minister Tarun Gogoi came down heavily on the BJP led government in Delhi for not allowing the people to know the content of the controversial Naga...