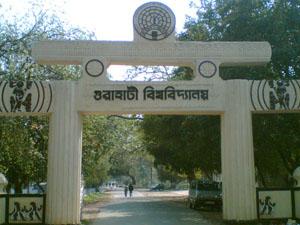 A brainstorming meeting of the Gauhati University Executive Council on Monday assures Vice Chancellor Dr Amarjyoti Chaudhory of Rs 25 crore package to uplift the varsity forcing him to withdraw his resignation.
Chaired by Gauhati University chancellor and Assam Governor Ajoy Kumar Singh at the Raj Bhawan on Monday the meeting takes up an assurance by Chief Minister Tarun Gogoi for the package latest by December 31.
Dr Cahudhory announced that he would withdraw his resignation he tendered a few days back which touched off a seismic wave of protest and resistance.

The Executive Council of the University, seeks a detailed project report from Dr Chaudhory on his the vision document incorporating the physical infrastructure content, the academic content and the implementation time-frame and modalities for the amount of Rs 25 crore.

Besides, a three member committeewill be there to examine the vision document for converting Gauhati University into a centre of excellence. The panel will further suggest a time-bound charter for implementation of the vision document.

Sources here say, the terms of reference of the committee will be officially notified to include a time-frame till October 15 as directed by the Governor.

Dr Choudhury who withdraws his resignation says he will exercise all efforts to ensure that the student community and the academic and non-academic staff of the university did not take any such step by way of agitation or protest to demean the prestige of the university. Dr Choudhury and State Education Minister Ripun Bora both pledged to work together to uplift the university.

Notably, peeved at the non receipt of the fund to uplift the university, Dr Chaudhory putin his papers a few days back and thousands of students demand necessary fund from the government.

26 Jul 2015 - 6:08pm | AT News
Journalists’ Forum Assam (JFA) has expressed serious concern over the murder of third scribe this year in Mumbai and demanded visible actions by the concerned authorities. The forum argued that the...