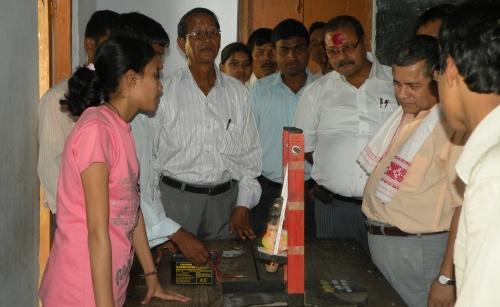 Mihir Kumar Barua,ADC,Udalguri hoisted the ASC flag to mark the begining of the science programme at 9 am followed by inauguration of all the science based competitions.On the occasion he explained about all the government programmes on science and technology for the students of the state and requested all to come forward to avail the benifits of the schemes.He also explained about INSPIRE award programme being launched by government of India, by which each student interested in science and technology have been awarded with a financial grant of Rs.5000 each for making science models at respective schools.Jayanta Kumar Das,District NCSC coordinator and Jacob Mushahari, principal ,Udalguri HS School also spoke a few words on the occasion.It needs mention that students who had been selected at the respective blocks (first three rank holders from each blocks) could only participate at the district level competitions. This year students from three blocks namely-Mazbat,Rowta and Kalaigaon took part in the competitions.

The prize distribution ceremony was held at 1 pm.It was presided over by Jacob Mushari,principal of Udalguri HS School. The first two winners of the district level science competition (in each category) will represent Udalguri district at the state level science competition being organized at Srimanta Sankardev Kalakhetra,Guwahati on November 10 and 11. In the science model making competition -Juriti Saharia and Himakhi Saharia of Bholabari HS won first prize ;Doli Saharia and Krishna Kalita of Kalaigaon Girls MV school second;in the science based poster drawing competition- Upamanyoo Das of Arunodoi Academy,Tangla won first,Khanjan Das of Maharishi Vidya Mandir,Tangla second;in the science based extempore speech -Dipanand Basumatari won first and Priyanka Talukdar of Maharishi Vidya Mandir,Tangla second prizes respectively to qualify for the state competition to be held in Guwahati.

18 Sep 2015 - 7:23pm | AT News
Chief Minister Tarun Gogoi on Friday admitted deficiency in the health department because of inadequate doctors and nurses.Addressing a CII meeting on health care in Guwahati, Gogoi said that the...

15 Aug 2014 - 9:30pm | AT News
The surface communication between Assam and Nagaland has come a grinding halt because of the economic blockade against the neighbouring state in protest against the Uriam Ghat incident where 11... 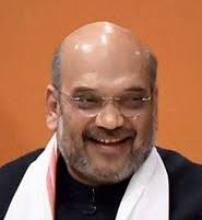 6 Jan 2018 - 8:59am | AT News
GUWAHATI: BJP president Amit Shah is on a three days visit to the north eastern region three months ahead of assembly polls in Tripura, Nagaland, Mizoram and Meghalaya. Shah, who landed in Guwahati...