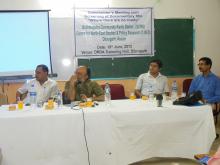 24 Jul 2015 - 10:32pm | Hantigiri Narzary
The AASU activists staged demonstration in front of the joint director office of Health Services in Kokrajhar demanding preventive measure from Japanese Encephalitis in the district as the disease...