GUWAHATI: The Assam unit of CPI demands a fresh deadline for updating the state’s NRC in the state saying the presence of a large number of illegal migants may make the bid failure.

Speaking to reporters here on Tuesday, the party’s national executive member and former minister Pramode Gogoi says the Centre has gone back to its words by Prime Minister Dr Manmohan Singh while he chaired the tripartite meet on the Assam Accord in New Delhi on May 5, 2005.

“The meeting resolved to complete the process for updating the NRC by by September 2007 but it has not happened,” rues Mr Gogoi adding that during this period, the Government has only set up a directorate and that too have yet to start its functioning.

“Neither Dispur nor New Delhi are taking up the issue with due seriousness apprehending a dent in the Congrerss vote bank,” says the CPI veteran.

He further appeals to the people to maintain a strict vigil on the matter till the NRC of 1951 is updated and a fresh Census report is published.

According to him, the state’s population figure is recording an abnormal rise of 1.30 crore after the 1971 Census.

Mr Gogoi thanked the decision of the Delimitation Commission to halt the process and termed it as a victory for the people of Asom saying this has become possible due to the united stand by various organizations and people of the state. 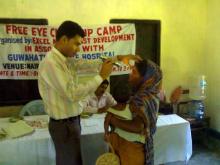