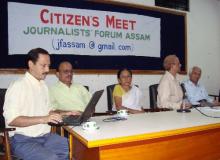 5 Nov 2008 - 11:05pm | Nava Thakuria
Terrorism is threat to democracy and humanity. And the terrorists have no caste and religions-the speakers of a Citizens' Meet at Guwahati Press Club today came out to these conclusions. Organized in...