Dr. Bhaben Choudhury , an eminent ENT specialist and researcher on ‘Tobacco and health problem’ says, “during the past 20 years , numerous epidemiological, clinical, pathological and experimental studies have shown that tobacco is related to disability diseases leading to various health problems.. Little scientific evidence was however obtained and its affect until late 1940, at which period medical text book either ignored the subject altogether or referred to some minor diseases which may occur due to use of tobacco. Now also though much more studies have been performed on Tobacco related disease and many articles have been published on the subject, but text book still lacking to focus the same like other health problem. Tobacco angina (Chest pain occur following tobacco smoking), Tobacco amblyopia (a form of blindness) and poor nutritional status were the only diseases those are describing in most of standard medical text book.”

Dr. Choudhury demanded that Tobacco and health problem should be a specialized paper in the medical science especially in the subject, Preventive and Social Medicine or Community Medicine. He insist that Medical students should be taught thoroughly about Tobacco related diseases and its remedy and especially preventive aspect. “Government should also strictly implement the law preventing people smoking in public place and also sale of tobacco”, he said. At present Dr. Choudhury is working on the ‘Gutkha’, the recently popularized formed of tobacco amongst the younger generation. He is now engaged in epidemiological survey of the use of ‘Gutkha’ and changes in the oral cavity following use of ‘Gutkha’. 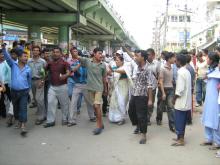 31 Oct 2008 - 1:54am | Nanda Kirati Dewan
After a prolonged lull, once again terrorists have capitalized their angers on Thursday in Assam with a biggest ever bombings that left over 50 killed besides hundreds injured.At least nine blasts...

21 Oct 2009 - 6:36am | editor
Prime Minister Dr Manmohan Singh is all set to visit Asam soon. The confirmation came up as Assam Chief Minister Tarun Gogoi called on the Prime Minister Manmohan at New Delhi on Tuesday where they...