Guwahati: Asom Gana Parishad (AG) begins its brainstorming session on Monday in the city to elect a new President besides finetuning a set of strategies to regain its strength.

Speaking to Assam Times, party top-guns here say the party will elect its new leader in the three day long session at the Pragjyoti ITA Centre for Performing Arts here. “Brindaban Goswami’s term comes to an end on August 31 and we are all set to elect a new president to lead the party.”

“More than 500 delegates from across the state have already arrived in the city to attend the meeting,” they informed.

The party opens its session by the opening of the delegates camp at 3 afternoon. It will be followed by the brainstorming executive body meeting of the party till 7 in the evening.

The election of a new president and the reunification issues are expected to dominate the agenda of the meeting.

On Thursday, the sitting president Brindabon Goswami will hoist the party flag in the morning before addressing the delegates.

The formal process of electing of the new party president will start at 10 pm along with other office bearers.

The open session of the party will hold on Friday at 10 in the morning. Former Gauhati University vice chancellor Dr Debo Prasad Barooah is schedule to attend the meeting along with the new president and other executive members.

26 Jan 2015 - 6:48pm | Kakali Saikia
Magh Bihu is not confine to Assam only these days. The much vaunted festival seems to have gone beyond the geographical boundaries at the initiatives of a section of Assamese people residing outside.... 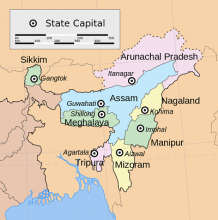 3 Aug 2015 - 5:36pm | Rajiv Roy
I am tempted to write this piece after my neighbor, whose son, a local tribal from Meghalaya, studying in a private institution in Maharashtra had to deal with some uncomfortable questions, that may...